Jalaluddin Ghazi, a 70-year-old taxi driver from Kolkata cannot read or write perfectly. But kids from his village address him as ‘Sir’ because he makes sure that they don’t remain illiterate. The man who has studied till only class 2 and is semi-literate in Bengali runs three schools in the Sunderbans. The three institutions, two primary schools and one orphanage-cum secondary school provide free education to 486 poor students in Uttar PurboThakuchak village. The three schools are run and managed primarily by the income from his taxi although citizens also help him with donations.

When he was 7 years of age, Jalaluddin had to drop out of school due to financial constraints. Poverty and hunger forced him to leave his village and he moved to Kolkata, along with his father. He used to beg for food and would sleep on pavements. But when he was 17, he started pulling tonga (hand-pulled rickshaw). In 1980, he started driving taxi and since then he has been keeping aside a large share from his income for charitable activities.

“But I wasn’t convinced. I believe that illiteracy is the root cause of all evils which is why I wanted to set up a school for poor students,” he said. 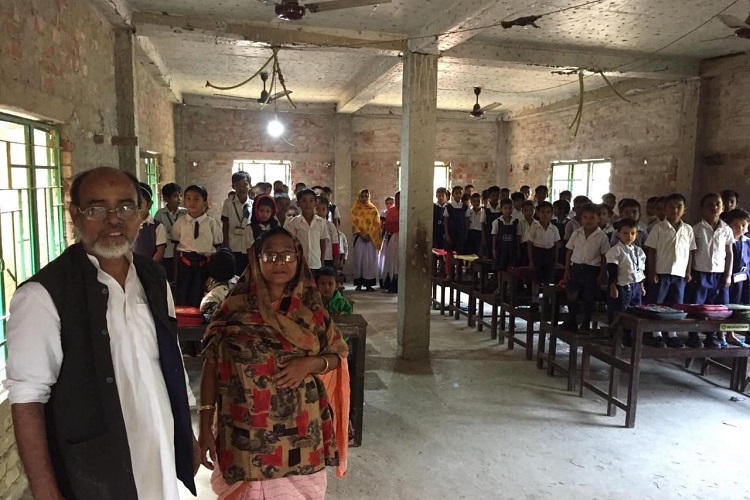 Jalaluddin with his wife at the school

In 1998, he materialised the dream after he opened his first primary school in his village which was basically a two-room structure. But it wasn’t an easy task for him. “I was ridiculed by many as I didn’t have enough money to buy land. In the end, I decided to set up the school in the small piece of land which I had inherited from my father,” he said.

Jalaluddin then opened another primary school and in 2006, he started an orphanage-cum-secondary school. Many people then started helping him with donations. But it was his income from the taxi that kept the school going.

“We used to take only what is required for our food and would invest the rest in the school,” he said, adding that it was not very easy to look after a family of six.

At 70, Jalaluddin has taken a break from driving. His elder son drives taxi while the younger one manages the school. He now wishes to set up a senior secondary school in his village. “Only education is the way out for the young ones in Sunderbans,” he said.