“I used to sell chana as my parents were very poor. It was very hard for us to make ends meet. Earlier, I thought farming is not meant for us but then I decided to give it a try,” reminisces 40-yr-old Ajay Oraon, whose one leg got affected by polio at the age of six.

Hailing from Mahil village in Jharkhand’s Khunti district, Ajay and his wife Rekha, who is also differently-abled, did not let their disability hold them back. Since the disability pension of Rs 600 could hardly have sufficed for a family of four, the duo took up farming.

Now, the duo cultivates nearly 10 acres of land, growing vegetables, maize and rice throughout the year.

With crutch in one hand, Ajay may come across as a fragile figure but give him a spade and he can single-handedly till acres of land in one go. The couple, who could not complete their primary education for lack of basic needs, have made sure their two children go to school.

“My daughter Samiksha is in class 4. She studies in a nearby school. My son Suraj, a class six student, studies in Ranchi,” said Ajay. 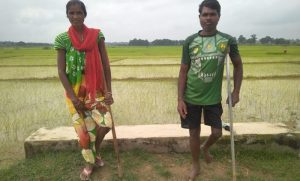 For Rekha, disability is just a word. She says “even if we are differently-abled, still God has given us eyes and hands which is enough for survival.”

Except the pension, none of the government’s welfare schemes have benefited the couple.

“We work hard to earn money. Though we get some money as disability pension we etch a living by working on farm,” Rekha, 35, said.

The duo will be felicitated by the district administration on the Independence day in recognition of their hard work and undying spirit.

“We are planning to avail all the agricultural related facilities to them. We have already given them seeds for plantation. We have asked them to submit a form that will allow us to provide them a pumpset on 50% discount. The government is also giving Rs 10,000 under agricultural insurance scheme,” Kumar said.

“They are very proud people and we have a grand planning for the couple on August 15. Rest assured, they will be getting the benefits of all the welfare schemes meant for them,” he added.