Ya, ya, we know you almost choked on your sambhar-rice over the feature image of this article. What in the name of Asgard is this beautiful thing? Before you completely lose it, let us inform you that Prasad Bhat from Graphicurry has come up with Infinity War movie poster themed on early 1990s Bollywood.

He says it’s a tribute to the stars he grew up loving. 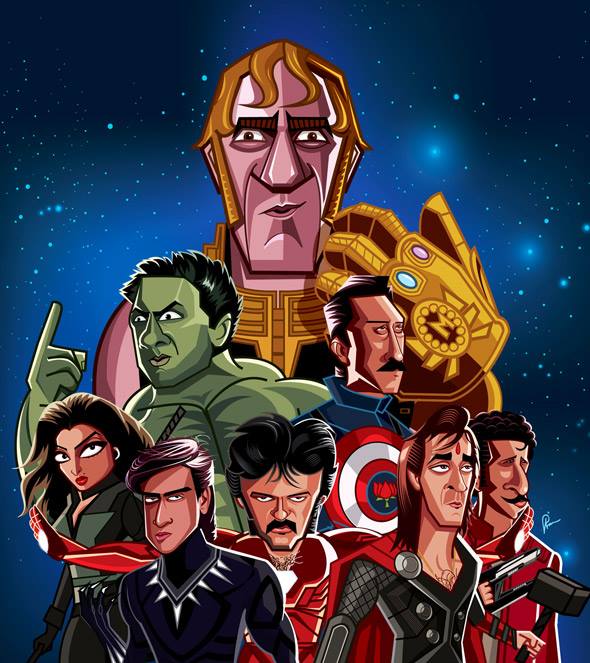 Bhat likes to call them ‘Aangaarey’ because Avengers is just not desi.

Here are the characters:

Thanos: Marvel’s most powerful villian has to be Mogambo/Amrish Puri. Can you think of someone else?

Hulk: Sunny paaji with his ‘2.5 kilo ka haath’ has beaten all the bad guys to pulp. He may not be able to jump as high as Hulk but his ‘Oyeeeeeeeee’ can be as defeaning.

Captain America: Even though his off-screen persona is the opposite, Jackie Shroff can easily play the ‘hero who’s a nice guy’. Remember, Ram Lakhan! But wait, has BJP sponsored his shield?

Black Panther: No, sorry. Just because he did that leg split on two motorcycles in his debut film doesn’t mean he’ll get to play Marvel’s best character.

Thor: If you have good looks, a great physique and long hair, you are automatically qualified to play Thor. Sanjay Dutt somewhat fits the bill, lookswise.

Black widow: Bollywood should have given Rekha a superhero movie of her own. No, Khoon Bhari Maang doesn’t count

Dr Strange: Naseeruddin Shah is the ‘theatre-types’ intellectual actor. He will be easily able to do all that magical stuff.