More and more skeletons are tumbling out of closets as scores of women are sharing their stories of alleged sexual harassment and assault by powerful men from media and entertainment industry.

However, a BJP leader from Madhya Pradesh has her own take on the #MeToo campaign. Reacting to allegations of sexual misconduct against Minister of State for External Affairs MJ Akbar, BJP’s state women wing chief Lata Kelkar said that women journalists are ‘not so innocent that anyone could misuse them’, news agency ANI has reported.

“I welcome this MeToo campaign… I think he was a journalist before becoming a minister… And all those who have accused him are also journalists… But I don’t consider women journalists to be so innocent that anyone can misuse them,” Kelkar said.

When asked if Akbar should resign from his post, she said the minister and the BJP leadership would decide on it. 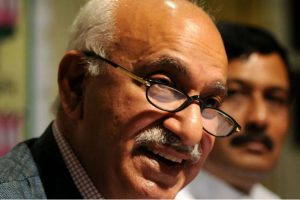 MJ Akbar, a former editor who headed prominent newspapers like The Telegraph and the Asian Age, has been accused of sexually predatory behaviour towards women colleagues, especially newcomers.

So far, his boss, Foreign Minister Sushma Swaraj, has evaded questions on him and so have union ministers Ravi Shankar Prasad and Smriti Irani. Only Maneka Gandhi, the union minister for women and child development, has called for an investigation against Mr Akbar. While political rivals such as Congress and AIMIM have demanded Akbar’s resignation, the government has refrained from officially commenting on the matter.

Former actor Tanushree Dutta’s allegations of sexual misconduct by Nana Patekar during a film shoot 10 years ago acted as a trigger that has encouraged more and more women to come forwards to share how theyt were tormented by powerful men in the industry.

The stalwarts of bollywood including director Sajid Khan, Subhash Ghai, Alok Nath, Vikas Bahl have come in the line of fire for indecent behaviour.

The women and child development minister Maneka Gandhi has announced that her ministry is planning to set up a panel of legal experts to look into the allegations of sexual harassment that have surfaced in the #MeToo campaign.

“I believe in all of them. I believe in the pain and trauma behind every single complainant,” she told PTI in an interview.

“I am proposing to set up a committee with senior judicial and legal persons as members to look into all issues emanating from the #MeToo campaign,” Gandhi said.