Speaking with The Telegraph, Esha Sharma Rabha, Golap Rabha’s wife said, “It was 11 at night, I was eagerly waiting for the final result. praying to the Almighty to bless him for his hard work, determination and passion. As soon as I got the amazing news, my tears flowed. I was speechless, hugged my daughter and cried. 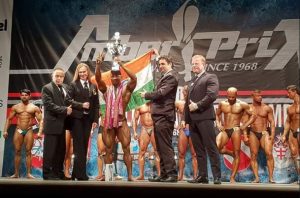 Hailing from a humble background, Rabha runs a gym and trains six hours a day, two hours at a stretch. Rabha took up bodybuilding in 2003 under the guidance of Jiten Kalita, a body builder at Boko in Kamrup district. Soon he started giving wings to his dreams and won the title of Junior Mr. Assam and Junior Mr. Kamrup in 2008. He also won title of Mr India in 2017 and 2018 and Mr Asia 2018.

However, this success came after a lot of hard work and failures. Rabha said initially he participated in many state level championships in which he failed , undeterred he continued till win started coming his way.

Meanwhile, Assam chief minister Sarbananda Sonowal also congratulated Rabha. In a statement, Sonowal said Rabha’s feat in the WFF-WBBF championship had made the state proud and lent fresh momentum to bodybuilding as a sports discipline in the state.