Three months ago, the lives of law students Apoorva YK and Snigdha Jayakrishnan were disrupted after they decided to speak out against one of the professors who sexually harassed students. The controversy may no longer make headlines, but a Bangalore-based illustrator hopes his artwork will bring the issue back into focus. The six-part illustration is now being widely shared on social media.

Animator and illustrator Sharath Ravishankar’s illustration, The Student’s Guide To Reporting Sexual Harassment *And Paying The Price For It, helps one recall the sequence of events at Symbiosis Law College in Hyderabad. “It’s extremely difficult and scary to continue fighting something like this without public support and that’s where Snigdha and Apoorva found themselves. Support is the most basic thing I found myself being able to provide,” 23-year-old Sharath tells InUth in a phone conversation.

The two female students had called out the institute’s assistant professor, Srinivas Methuku, for “constant ogling and causing discomfort”, reported The News Minute. What ensued was more harassment, threats and eventual eviction of the two students from the hostel while the accused was apparently ‘reprimanded’ and later on suspended after the backlash.

Sharath decided to illustrate their experience after speaking to the two women and making sure the episode was comprehensively captured through the illustrations. “There’s no way I could tell someone else’s story without their explicit consent, and more importantly, their request. It’s really important to make sure to remember that the idea is to help them be heard, everything else is secondary. So being in near-continuous communication with them as their struggle against Symbiosis developed was paramount,” Sharath said.

On October 26, 2018, an eviction letter from Dr Sukhvinder Singh Dari, the officiating director of Symbiosis Law School, was sent to them. “You are hereby requested to vacate the campus from today i.e. October 26, 2018, till further order,” it stated. After their eviction, the two students were allowed to take their exams at a centre outside the campus. “We were told that an investigation is underway. The University registrar conveyed to us a list of disciplinary misconduct allegations and directed us to attend a high power committee. They didn’t give us a copy of complaint letters or other evidence. The university specified that all communication is confidential and that we cannot put it on social media or print media,” Snigdha tells InUth.

Stranded in a city with no relatives or a roof over their heads, Apoorva and Snigdha had to turn to her friends for a place to stay. “Snigdha is from Kerala and I am from Karnataka. After the eviction, we have been staying with our friends. We’ll continue our fight for justice and have filed individual petitions in the Hyderabad high court,” Apoorva asserts. 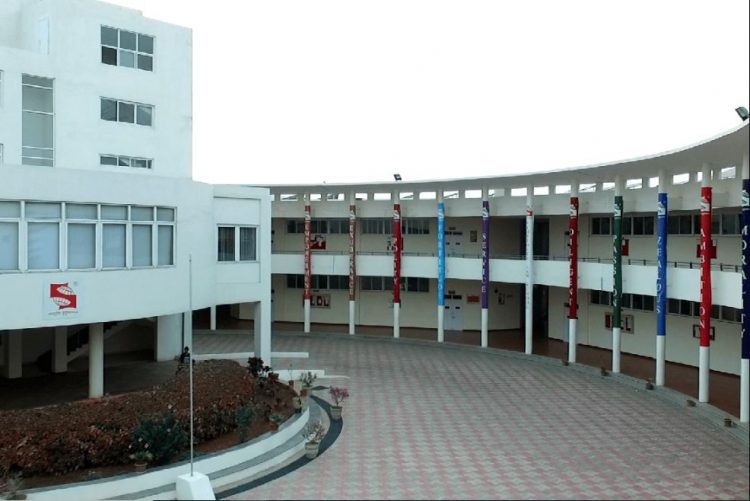 The women allege that the college put up a ‘statement of truth’ on their official website and also put out newspaper advertisements that laid out a biased version of events. They claim that the information misrepresented the students and also disclosed information that was supposed to be confidential.

However, Apoorva and Snigdha remain uncertain about what lies in store in the future as they take on the institute. “The main issue is uncertainty. Symbiosis hasn’t taken any specific action against us, other than the eviction order. We have no idea how long that will last. We have missed a lot of classes and probably won’t be able to write exams this semester as Symbiosis has a strict 75% attendance policy,” says Snigdha.

This is where Ravishankar’s illustration comes in as it attempts to help people learn the other side of the story. It also directs readers towards a petition by Jhatkaa.org, which has apparently helped in the dismissal of the accused faculty member. The petition now has 1,778 of the 5,000 required signatures.