In an alleged incident of hate crime, five Kashmiris including 4 women were roughed up in southeast Delhi. On Thursday, a 40-year-old man from Srinagar and his three sisters were beaten up by a group of residents who wielded sticks and allegedly called them ‘Kashmiri terrorists’.

On Saturday, four persons were arrested for their alleged involvement in the incident.

According to police, the fight was over feeding stray dogs.

Multiple complaints were filed from both sides and the residents alleged that the siblings would feed dogs in the vicinity, which attracted more canines and caused a menace, police said.

“The complainant is an avid dog lover and animal rights activist. There have been more than 50 complaints and counter-complaints against the residents of Siddharth Enclave and the complainant,” PTI quoted a police official as saying.

However, the victims allege that they were targeted because they were Kashmiris.

“My sisters were abused and beaten up. I have a broken left hand and one of my guests who had come to visit us was also attacked. It was a planned attack and the accused were carrying hockey sticks,” Indian Express quoted one of the victims as saying.

He said that they were roughed up and the accused were shouting slogans, ‘Kashmiri terrorists should be sent back’.

A video of the incident has gone viral. The footage shows some people, including women, arguing with and assaulting the victims. One of the siblings is seen slumped next to a car and being pulled by someone in the crowd. 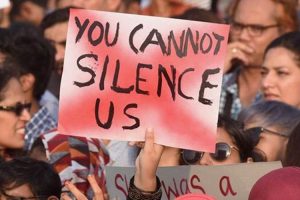 The incident has sparked political reactions with Jammu Kashmir chief minister Mehbooba Mufti asking her Delhi Counterpart Arvind Kejriwal to ensure the safety of Kashmiris in the national capital.

“Apparently the girl was made a target because she was feeding stray dogs. What sick mindset is this?” he said in a tweet.