“When I was in class 7, one of my teachers told us that the best way you can help your country grow is to make yourself worthy, the country will have one less poor,” reminisces 31-year-old Vicky Roy, whose journey from being a ragpicker to a celebrated photographer will make you believe in your dreams.

In 2008, Vicky was selected by the US-based Maybach Foundation to photo-document the reconstruction of the World Trade Center. He was awarded an MIT Media Lab fellowship in 2014 and was a part of Forbes Asia “30 under 30” list in 2016.

In between exhibitions, Vicky works with WHO and UNICEF, and also does commercial assignments. In spare time, you would find him addressing TED events or INK talks, telling people that impossible is just a word. 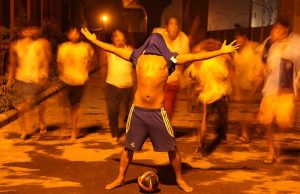 Son of a poor tailor of Purulia, Roy was sent to his maternal uncle’s place in Bokaro where he was beaten for every little mistake.

“I was just fed up of the frequent beating. I decided against going back to my father’s place as he was too poor to support us. I stole Rs 900 from my uncle’s pocket and boarded a train to Delhi.”

Then an 11-year-old, It was beyond Roy’s wildest imagination that life will drastically change from here

“In 1999, When I arrived at New Delhi Railway station I was clueless, where to go. I went towards Ajmeri Gate, There was too much crowd.I came back to the station and started crying. Then some ragpicker kids on the platform approached me and asked if I had run away from home”

Soon, Roy joined the group of ragpicker kids, most of whom were either destitute or runaway children.

“We used to collect strewn bottles from station and washed them at the water coolers installed at railway platforms and refilled them. Then we thrusted the bottles inside our shirts and sold it at Rs 5 in general bogies. Survival on platform was never easy cops used to beat us if there was any theft on the platform. Food was never a problem. We used to ran away with the leftover food of Rajdhani and Shataabdi express and they (pantry car people) never said anything to us,” he said. 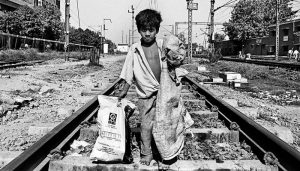 If cops chased them away from platforms, Vicky and his friends slept on the walls of Ramleela Maidan.

Among many odd jobs to satiate his hunger, Vicky also washed dishes at a local Dhaba. In 2000, he was rescued by a social activist associated with Salaam Baalak Trust, Delhi and sent to its child shelter home in Paharganj.

Vicky found his first mentor in Mr AK Tiwari, the coordinator at STB shelter home, Who spotted his passion for camera during a workshop.

“It was during a workshop that a British photographer told me that he has an innate understanding of photography. We also observed that he was not interested in studies but with a camera in his hand, it looked as if he has found himself.”

Initially, he gave Vicky his first camera, a Kodak KB10, which was used to click images of kids at shelter home and also enrolled him in a six-month training programme.

“We gave him centre’s basic camera. when we teach the students we click their images. After a few days he came again and said this small camera will not work, we need to give hims a new camera. We came to know the new camera will cost Rs 20,000, at that time it was too much money. After we arranged the camera, it was reel, but it was his passion that inspired me to help him.” 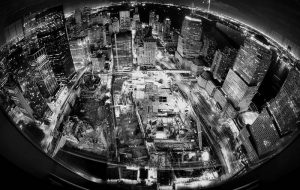 Soon, Vicky’s talent was spotted by noted portrait photographer Anay Mann who took it upon himself to groom the 17-year-old into a successful photographer.

” I was speaking to a friend of mine Dadi Pudumjee who is an old friend and trustee at Salaam Baalak Trust, He mentioned that there are some kids who want to learn photography from me. That’s when I met Vicky Roy. He was very energetic, very enthusiastic, very raw and I made him promise me that you have to work with me for at least four to five years to imbibe the real values of photography.”

Roy says, Mr Mann not only taught him photography but also the core values of life.

“Since I came from an NGO. I was not very much aware of the basic etiquette on how to interact with people. I used to address people as ‘oye idhar aana’ but sir (Mann) would get angry and then tell me that that’s not how you address people. Request them with a ‘please’ and end the conversation with a ‘Thank You’.”

For Vicky Roy, his mentors mean world to him. Had it not been for these two people, he would never have become what he is today.