Hold the phone. Stop the press. The Tamil Nadu government has finally found a way to end child sexual abuse for good. The state has found that Brahmasthra to every house-help who asks you to keep a secret; the Rambaan to every, “beta, mere kamre me bahut toffees hai.” And their advice to little kids, who are probably too young to envisage an adult’s lecherous intent, is *drumroll* to not be provocative.

According to a Class 8 Science textbook under the Samacheer Kalvi system, it’s the victim’s fault through and through. Explaining the ways in which one could prevent sexual abuse, the textbook states, “Avoid being alone in company of suspected person. Don’t wear provocative dresses. Do not let allow anyone to hug, pet or kiss you.” I know what you’re thinking. Why is a Science textbook preaching sanskaars? But yes, if your children are going to not “keep distance from the other sex,” a little bombardment of lectures on modesty is warranted. About time school authorities introduce ghunghats and burqas as uniforms, amirite? Skirts are too much of skin-show anyway.

The chapter called ‘Reaching the Age of Adolescence’  further adds, “Take care of the way you sit. When you are going to school by auto, bus or by train keep distance from the other sex.” Well, time to throw away those vain Prevention of Sexual Harassment (POSH) schemes, that talk about consent and private spaces, your workplace has been feeding you. This is the real deal. 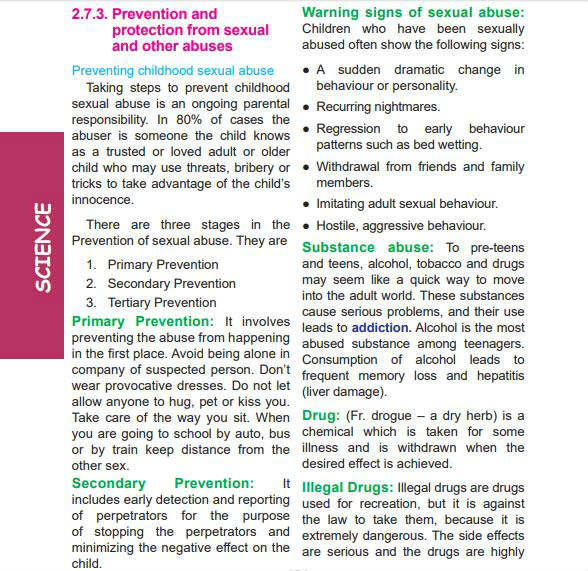 On the same page, the textbook mentions imitation of adult sexual behaviour as a warning sign that your child is being sexually abused. Erm, aren’t girls, already “imitating adult sexual behaviour” by not sitting properly and talking to boys? Isn’t that what this glorious system intends to teach us, that young girls are being promiscuous and need to shut their legs, lest they bring shame to their families? Seriously, natural selection better give females an inherent understanding of the male gaze. Otherwise, they are going to keep “asking for it” and accusing innocent men of rape. I wonder why boys are so much easier to parent.

While we’re on the subject of young males, the book actually helps them build a stronger, more “masculine” personality; by directing them to the only place worthy of them: the pedestal. And, the earlier they learn how to disregard female’s opinion, the better.

ALSO READ: Even As The Nation Outrages Over Unnao And Kathua, Other Horrific Rape Cases Emerge

Speaking to The News Minute, Director of State Council for Educational Research and Training G Arivoli stated, “This textbook has been in existence for 12 years. Why are you bringing it to our notice now? Nobody has complained till now.” Well, of course. Who needs to constantly update the school syllabi? Stale knowledge is as good as it gets!

He added, “We are currently only revising books for Class one, six, eleven and twelve. This is already time-consuming and we are yet to see what existing books contain. I will see what can be done.” Good call, Mr Arivoli. You tell ’em. Show them that sexual harassment is never going to be a priority. It’s such a made-up concern anyway.

So, the next time, a girl comes to you, acting all empowered, complaining about how someone violated her sense of being. Tell her to shut up. Tell her that she asked for it. Tell her that no, she may not have her rights. No, means no.