Is there a dearth of female experts in our country? A definite no. However, a survey undertaken by a women rights group found that representation of women in panel discussions in news media is STILL very poor. A month-long media study conducted by Network of Women in Media India (NWMI) in India revealed that men constituted a whopping 86% of panels on Indian news channels, while women constitute a little less than 14% and transgender panelists constituted a minuscule at 0.2%. 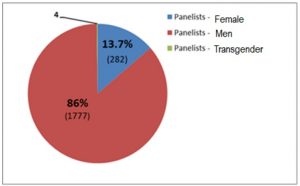 If one were to look at regional language media, Hindi, Gujarati, English and Urdu fared much better in terms of representation of women among panelists than Tamil, Punjabi and Odiya, which together had only 5% female representation. The survey also found that Hindi channels are more responsive to women experts with women panelists constituting 23.5% of the panelists compared to just 17% in English channels.

“Women are usually under-represented in TV channels. Their opinions do not seem to matter, and their absence is hardly noticed by decision-makers on these TV channels and even by the audience. Having become accustomed to watching and listening to men pontificate on ‘important’ issues, most viewers do not seem to be aware that women’s voices are rarely heard during crucial debates about vital issues that affect and ought to concern all citizens,” said Sonal Kellogg, the research coordinator. 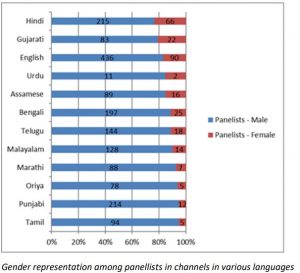 The women were also found to be heavily under-represented in news anchoring. Nearly three quarters of the anchors were men (72%). The imbalance was highest in Hindi language channels, where men constituted about 89% of the anchors. English channel fared well on the other hand, with the female to male anchor ration being balanced. 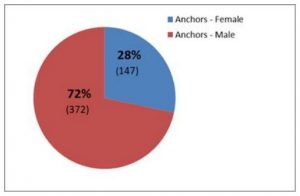 In as many as 65 percent of total TV news programmes monitored, there wasn’t even a single women in the panel discussions held during prime time news and talk shows on leading TV channels of India.

Done over a month from April 22 to May 21, the study examined programmes aired by 28 channels in 12 languages: six in English, four in Hindi and 18 in various other Indian languages (Gujarati, Punjabi,Urdu, Tamil, Telugu, Malayalam, Bangla, Odiya, Asamiya and Marathi).