“Who is Sonam Gupta? How did she became bewafaa?”

On the sidelines of the demonetisation chaos, the social media is asking the above mentioned question again and again.  While the identities of the alleged ‘betrayer’ and victim are not known, social media has become a platform for several Romeos to voice their support for the anonymous lover.

To top it all, all victims of unrequited love have organised a Facebook event calling upon people to join a protest march against the ‘bewafai’ of Sonam. This comes after the four-word rant appeared on a Rs 2,000 note, introduced by the Narendra Modi government after scrapping Rs 1,000 and Rs 500.

Amongh heightened interest in Sonam Gupta and her lover’s real story, a stroke of luck landed me the scoop of the year.

My source in Lover’s Nest (a coffee house) where I usually sit to ponder over my ever single-life handed me photos of a 25-year-old youth preferring to be called an Ablaa Premi (naive lover). He was seen scribbling the same sentence on Rs 1,000 and Rs 500 notes.  It didn’t take me seconds to conclude that he was the answer to the question which entire Nation wants to know. 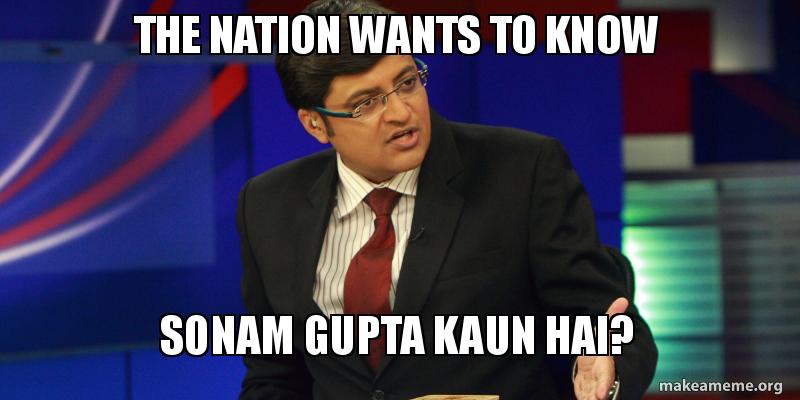 I had to meet Abla Premi at all cost. After all he is the voice of all  friendzoned boys in this country. My source helped me reach out to him and we finally decided to meet at his house. Armed with a packet of chips and a quarter of Old Monk, I approached him. The old monk came handy. It took him five pegs to open up.

I asked him, why did he scribble the same name twice in the same year — earlier on a ten rupee note and this time on a Rs 2000 note? 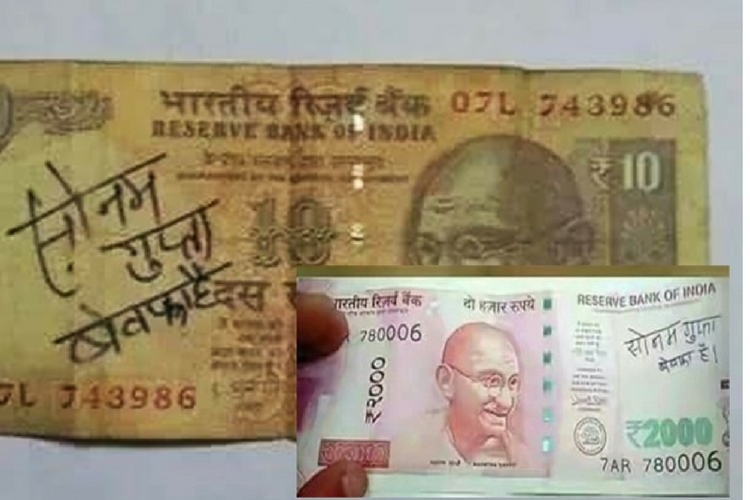 A screenshot of the phrase on Rs 2,000 note which went viral. (Photo: Express)

Abla Premi clarified he had not scribbled Sonam Gupta Bewafaa Hai on the Rs 10 note which had gone viral earlier this year. “The name is not exclusive,” he retorted angrily and took a heavy breath.

I stayed quiet, and he continued. It so happened that Sonam and this unlucky man (AP) had been dating for the past two months. A lot of groundwork had gone into wooing her. Copy-pasted SMSes, cheezy film dialogues had been twisted to win her heart. After being friendzoned thrice, she agreed to date him, he claims.

Everything was going fine till tragedy struck on the ill-fated night when Modi announced the move to scrap Rs 1,000 and 500 notes. As a proud Modi bhakt, AP spent the whole night penning patriotic messages hailing the prime minister and tagging Sonam and her friends on Facebook. He even promised her that he would personally exchange old notes of hers with the new ones.

Two days later, when the banks and ATMs became operational, this self-proclaimed ’90s style lover queued outside one of the ATMs in Connaught Place while waiting for Sonam, who according to him had promised to stand by his side in the queue and morally support him throughout the day.

“Meanwhile, I got a WhatsApp message which left me shell-shocked. It was from none other than Sonam who wrote, sorry dear, I met a frnd of mine who works in bank. I got some notes exchanged in no time. He is so nice. We can stay friends (sic).”

“I fainted. How could she do this to me. Those endless mobile phone recharges, unlimited ice teas at that damn coffee shop in Mayur Vihar. Is my love worth Rs 2,000? She is a dagaabaaz, bewafaa. I decided to take revenge and stood in a queue at a bank the very next day.”

AP managed to exchange his old note for a Rs 2,000 currency note at the bank and no guesses what did he do with it. With his emotions and nose running at the same time, he wrote,”Sonam Gupta Bewafaa Hai.”

While he sat there sobbing inconsolably, with a wicked grin I left the spot and came back to my office. And this happens to be my first exclusive story which I am not proud of.

Note: This news piece is entirely a work of fiction.