Though the start-up continues to register an impressive growth, it is facing an unexpected hurdle. In last four months, the company officials have lodged six cases of bicycle theft with the Gurgaon police so far.

Speaking to Times of India ,they said that despite giving the commuters designated parking spots for the bikes, in about 10% of all rides, commuters leave the bikes at random spots, including on the roadside, resulting in misplaced and stolen bikes.

In some cases, miscreants even physically lifted the locked cycles and took them away to Rewari, located 60km from Gurgaon. 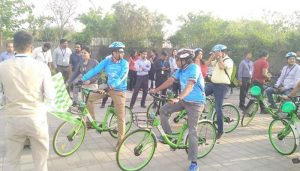 ‘Mobycy’ has started with a fleet of 200 bikes in Gurgaon and increased its fleet to 350 now, with over 2000 rides daily.

“We recovered two bicycles after filing a complaint with the Gurgaon police. On average, we are losing two bicycles a month while clocking nearly 60,000 rides per month,” Akash Gupta, CEO and founder of Mobycy, told Hindustan Times.

The bicycle are used to provide connectivity to commuters from areas like Metro stations and bus stops to offices and residential areas.

A user has to pay Rs 10 per hour for availing of the facility and the recommended distance for a ride is less than 5 km. The user has to station the rented cycle at designated parking spots as listed on the app.