Wing Commander Shaliza Dhami has become the first woman officer of the Indian Air Force to have been elevated to the post of the Flight Commander of a flying unit.

She took charge of a Chetak helipcopter unit at the Hindon Airbase in Ghaziabad, Uttar Pradesh. Chetak is a single engine turbo shaft, light utility helicopter with capacity of 6 passengers and has maximum speed of 220 km/hour. Her elevation in the flying branch is moving a step closer towards women officers commanding units and formations in the service.

What’s The Role Of A Flight Commander

Shaliza will be the second-in-command reporting to the Commanding Officer, a rank below the Group Captain and above the Squadron Leader. This will allow her to command a wing of three to four choppers–and get them in formation. Chetak helicopters are mainly used to transport cargo, and can be used for rescue operations and evacuations. 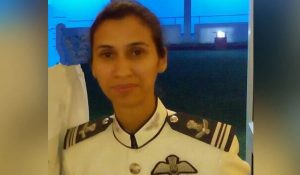 Why Women Promoted To Combat Roles Is A Good Sign

Though Shaliza will be commanding the choppers that will not participate in airstrikes, this move will be isntrumental in narrowing down the gender gap in the Indian army. After years of fighting stereotypes to be included in combat roles, women are getting their due. In July, 2018, IAF had decided that it will induct women as fighter pilots. In May, Flight Lieutenant Mohana Singh scripted history by becoming the first woman IAF pilot to become operational on Hawk advanced jet aircraft. Flt On May 22, Lt Bhawana Kanth became the first women fighter pilot to be qualified to undertake missions by day on a fighter aircraft.

But there are times when disparaging comments from the army doesn’t help. Just last year, army chief Bipin Rawat said that women aren’t fit for combat role. Speaking with News18.com, General Rawat had said that while he was ready to introduce women to combat roles, the Army may not be as most jawans come from villages and they may not accept a woman officer leading them.