A blog post has shaken the core of Kolkata’s theatre circuit. The post, published on May 4, highlighted how a former female member of theatre group Mad About Drama (M.A.D) had been in an abusive relationship with an integral member of the group, Aritra Sengupta.

The post also alleged that there were multiple women, mostly young members of the group or interns, who were allegedly physically and sexually harassed by Sengupta. “I am told that this has been a pattern with almost every female intern at his theater group who are much younger and much more vulnerable and who simply do not have the circumstances to speak out against it because of how well-regarded he is in social and professional circles,” the post pointed out. 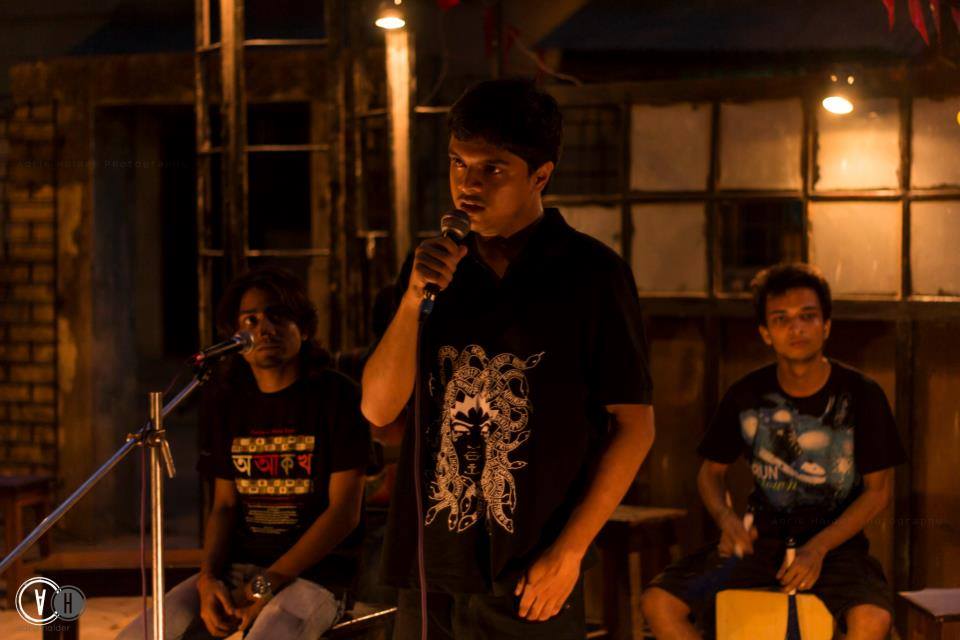 Aritra Sengupta (centre) the former creative director of M.A.D. has been accused of multiple instances of sexual misconduct by young members of the theatre group. Courtesy: Facebook/Mad About Drama

Accusing the theatre group’s members of shielding Sengupta’s behaviour and overlooking multiple episodes of sexual misconduct, the woman wrote, “Sleazy texts, molestation, gaslighting, emotional abuse and most of all, using his position in the creative circuit, has been his norm since the inception of the theater group he co-founded…It is no secret to his crew members and friends that he is a serial abuser. In fact, his abusive behavior has been highlighted time and again during his university days although no action had been taken by the same crew members.,” the post claimed.

The woman claims she was in a 2-year-long (from September 2016 to February 2018) monogamous, consensual relationship with Sengupta during which she was also subjected to emotional and psychological abuse. Once the woman confronted Sengupta about other episodes of sexual misconduct, he attempted to deflect from the topic and tried to gaslight the woman, who had initially been diagnosed with clinical depression after repeated instances of mental harassment (according to her blog post). He later announced that he would no longer continue working with M.A.D.

Soon after the blog post went viral, one of the founding members of the theatre group, Soumendra Bhattacharya, had reached out to the woman, assuring her that Sengupta had been dismissed from the theatre group. When InUth spoke to Bhattacharya, he said, “We are registered as a society and there is no such post as a creative director that can exist in a society. He was, however, a part of the governing body. We are willing to fully cooperate if she (the woman who wrote the blog post) wants to take legal recourse. But the allegations against us about shielding the accused is baseless. We have not been approached by anyone about the alleged misconduct.”

The theatre group also recently posted a statement on Facebook post, attaching screenshots of the dismissal letter of Sengupta. Bhattacharya says they will be posting another statement late on Thursday.

Support poured in for the woman who had written the blog post, days after it went viral, including a Facebook post by a former intern of the theatre group, Aishwarya Kazi, shed light on how a few people in M.A.D often bullied, abused and physically violated people without any qualms. 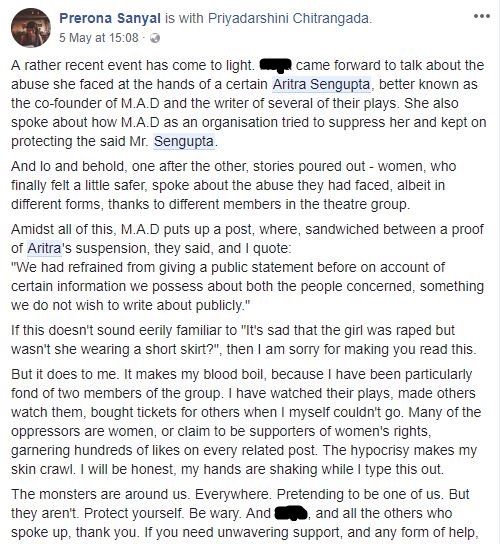 Screenshot from Facebook. Names have been blackened to protect identity.

(Repeated attempts to get in touch with Aritra Sengupta, the woman, who wrote the post, and other women who have accused Sengupta have failed. This article will be updated in case they choose to respond.)