A government Ayurveda hospital in Ludhiana will soon launch a project under which thalassaemia patients will be treated with goat blood, injected through their rectums.

In addition, the Punjab government has also contributed Rs 13 lakh for the project, he said, adding that the treatment is likely to start in four-five months.

Thalassaemia is a blood disorder marked by lower-than-normal amounts of haemoglobin (oxygen-carrying protein). Under severe condition, it may require blood transfusions or a donor stem-cell transplant.

Kumar claimed this is not the first Ayurveda hospital to have run this programme. 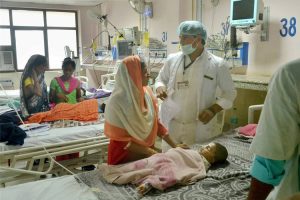 “Dr Atul Barkar first started the treatment in Ahmedabad” he said, adding that the project is being run successfully at city’s Akhandanand Ayurvedic Hospital since 1984.

The treatment — described in Ayurveda as ‘raktabasti’ — is expected to be started at Government Ayurvedic Hospital in Model Gram, Ludhiana, by September, The Tribune reported. The goat blood is injected into patient’s body as enema i.e. through the rectum

“Goat blood is injected into a patient’s body through the rectum. This does not let the haemoglobin level in the patient drop. Over a period, the patient no longer needs blood transfusion. Initially, blood has to be given four times and the frequency is reduced to three times and later two times and so on till the patient is fully cured,” Kumar said.

The goat blood will be procured from the municipal slaughter house and tested for infection before use.

However, doctors have questioned the method on the grounds that there is no scientific proof available on this line of treatment.

Speaking to Outlook, A G Thomas, a former director of the CMC Hospital, Ludhiana,  said there was “no substantial proof in this form of randomised control trial”.

He said those practising it should publish their line of treatment in international medical journals.