All you unsociable humans, rejoice! If inessential human interactions leave you in a state of suffering, you should thank the world of Robotics, once again! After ‘Sophia’, the social humanoid robot, Robotics is all set to greet the world with another engineering marvel.

Sirena Technologies, a private startup based out of Bangalore, has knocked together a humanoid dubbed KEMPA. The humanoid will be deployed at Bengaluru’s Kempegowda International Airport, where it will greet and guide the travelers in two languages—English and Kannada.

Karnataka’s Minister of Innovation & Technology, Priyank Kharge, introduced the nation to KEMPA through a 1-minute video which he shared on his Twitter handle. In the video, the humanoid while introducing himself to the humans said, “KEMPA, an advanced humanoid completely designed and manufactured in Bengaluru. I’m designed for deployment at the Kempegowda International Airport where I can be of assistance to you for flight-related queries, suggest places to visit in Karnataka, or simply entertain you on conversation with artificial intelligence over a cup of coffee.” 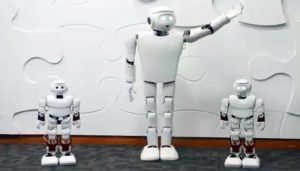 Before its official launch, humanoid KEMPA is being programmed in such a way that it assists the flyers by providing all the necessary information about their journey in a meticulous manner.

Humanoids have been a groundbreaking new way to simplify the human world, and thankfully, the idea has made a good headway in the past couple of years in India. Mitra, a made-in-India robot, set the Internet buzzing when it became a part of the Global Entrepreneurship Summit in 2017. The country witnessed an engineering marvel when the indigenous robot greeted Prime Minister Narendra Modi and Ivanka Trump at the event.