19th Century English Naturalist Charles Darwin’s theory of evolution is “scientifically wrong”.  At least, Union Minister for State for HRD, Satyapal Singh believes so. (BTW, even the ISIS believes that)

Singh believes  human being never emerged out of apes and have always existed as humans.

He apparently has some solid proof to back his claims up.

“Nobody, including our ancestors, have said or written that they ever saw an ape turning into a human being. No book we have read or the tales told to us by our grandparents had any such mention. Human being have always existed on earth as human being and nothing else.”

Some tried to explain that apes don’t magically transform into humans. As per Darwin, they evolved from a common ancestor.

Darwinism is a theory of biological evolution developed by the English naturalist Charles Darwin (1809–1882) and others, stating that all species of organisms arise and develop through the natural selection of small, inherited variations that increase the individual’s ability to compete, survive, and reproduce.

But Singh is not taking all that nonsense. He wants it taken off school and college curriculum.

His comments have attracted some really interesting reactions.

Guys. I just wanted to let you know Darwin was wrong. No one saw ape turn into man. No evidence. I mean such a huge event and not one selfie taken? That doesn’t seem right.

Actor Farhan Akhtar has made it clear, where his sympathies lie.

Breaking – Apes join protest against Darwin’s Origin of Species. They deny any involvement in the existence of certain homosapiens.

This is not the first time Singh has said something to which we have let out a collective gasp.

When Singh is not debunking scientific theories, he is busy giving gyan to young people about bharatiya sanksriti.

In 2013, in the aftermath of the shocking case of rape of a photojournalist, Singh, the then Police Commissioner of the state said,

More recently, of all the things the junior HRD Minister could have talked about to young students, Singh chose the topic of importance of wearing traditional clothes for girls.

“No boy will be ready to marry a girl who comes to the mandap (wedding stage) in jeans.”

When Darwin postulated “survival of the fittest” as an important strand of his evolutionary theory, he probably didn’t know one day Satyapal Singh would be considered fit for a position in the HRD Ministry. But then, who knew someone with bizarre ideas about the reproductive powers of peacock tears would be deemed fit to serve as a judge in a High Court; or  someone who thinks virgin = unmarried would be the best possible candidate to hold the position of a state’s Health Minister.

You see, Singh is not all that wrong, after all. Darwin definitely went wrong somewhere. 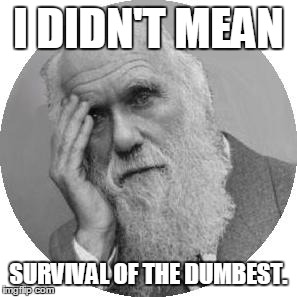