If there is one thing that the millennials know how to do right is how to party hard and that usually involves a lot of booze. Though the legal drinking age in our country varies from state to state and unless you are in Goa, Himachal Pradesh or Puducherry (where the legal drinking age is 18 years) you still have to wait to turn 21 (if not 25) to even be allowed to look at a glass of beer. Unless, of course, you are in Bihar, Gujarat or Lakshadweep, where it’s illegal to think about drinking. Even so, the young blood has remained unfazed by the restrictions and has continued to experiment with the variety that is available out there.

In a country where you are considered responsible enough to elect your leader at the age of 18 years and sensible enough to get married at the age of 21 years, having 25 years (or even 21 years) as the legal drinking age seems an extension of hypocrisy that exists in the society. And like many other things, this gap between the real world and what’s assumed to be right has to change. The society needs to get more liberal and the youth must be given the liberty to drink at an age when they think they can handle the effects of alcohol.

Having said that, it is important to note that while we need to be liberal with the age and restrictions (read total alcohol ban), having an elaborate legal system that not only defends those who have been wronged by the people under the influence of alcohol but also understands and acts upon the limitations that consuming alcohol possesses. Our constitution falls has a meticulous system that not only prescribes fair punishments for who commit crimes or break the law but also protects those being wronged.

So, next time you head out for a “party”, here are some laws that you should know about: 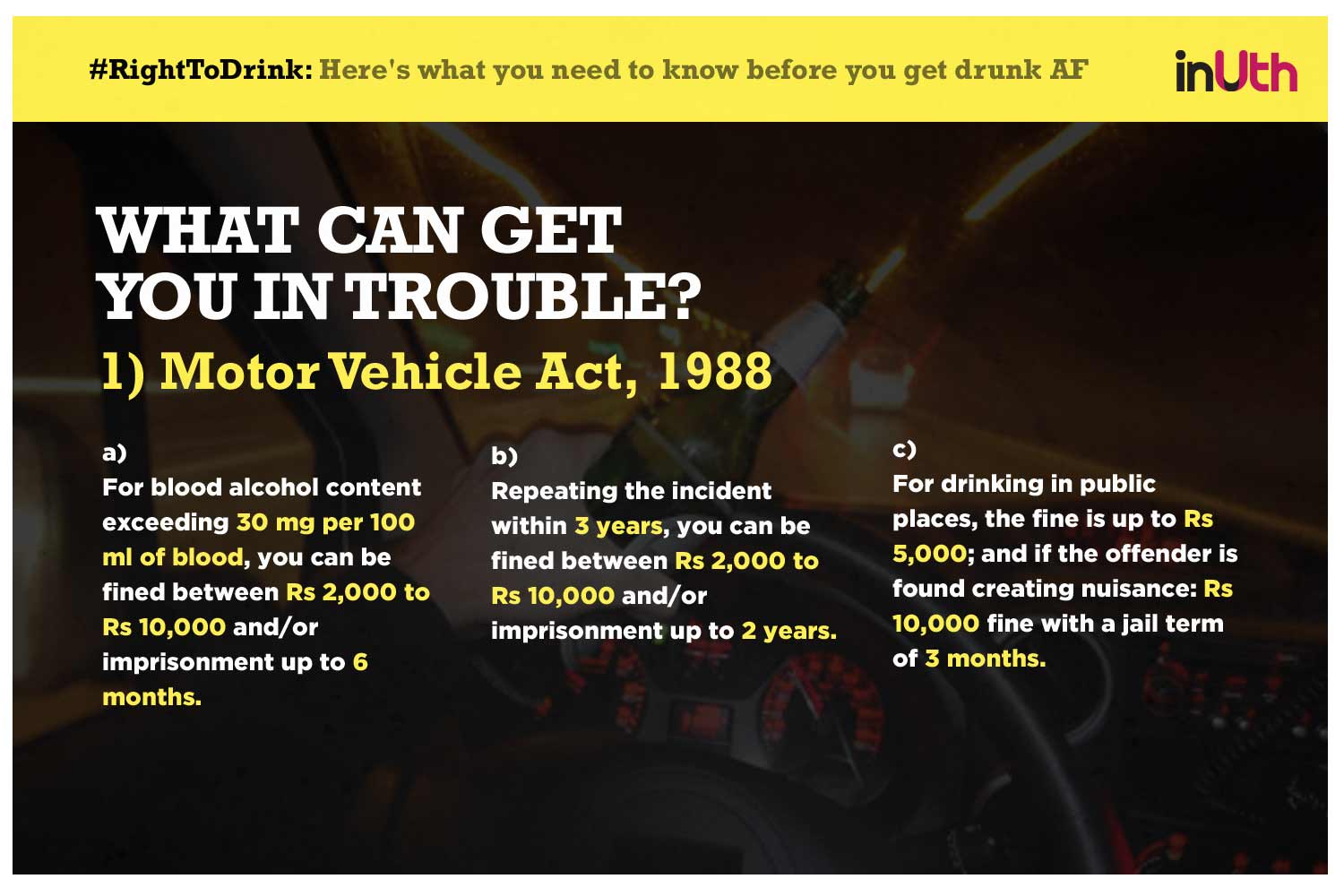 Right To Drink – What can get you in trouble

What can get you in trouble?

Driving or acting up in a drunk state can get you in a lot of trouble of trouble. Here’s how:

1) Motor Vehicle Act, 1988
The minimum blood alcohol content for an individual to get punished by law is 30 mg of alcohol per 100 ml of blood. If a person is found driving under the influence of alcohol, he/she can be fined between Rs 2,000 and Rs 10,000 and/or imprisonment up to 6 months. Repeating the incident within 3 years, you can be fined between up to Rs 10,000 and/or imprisonment up to 2 years. 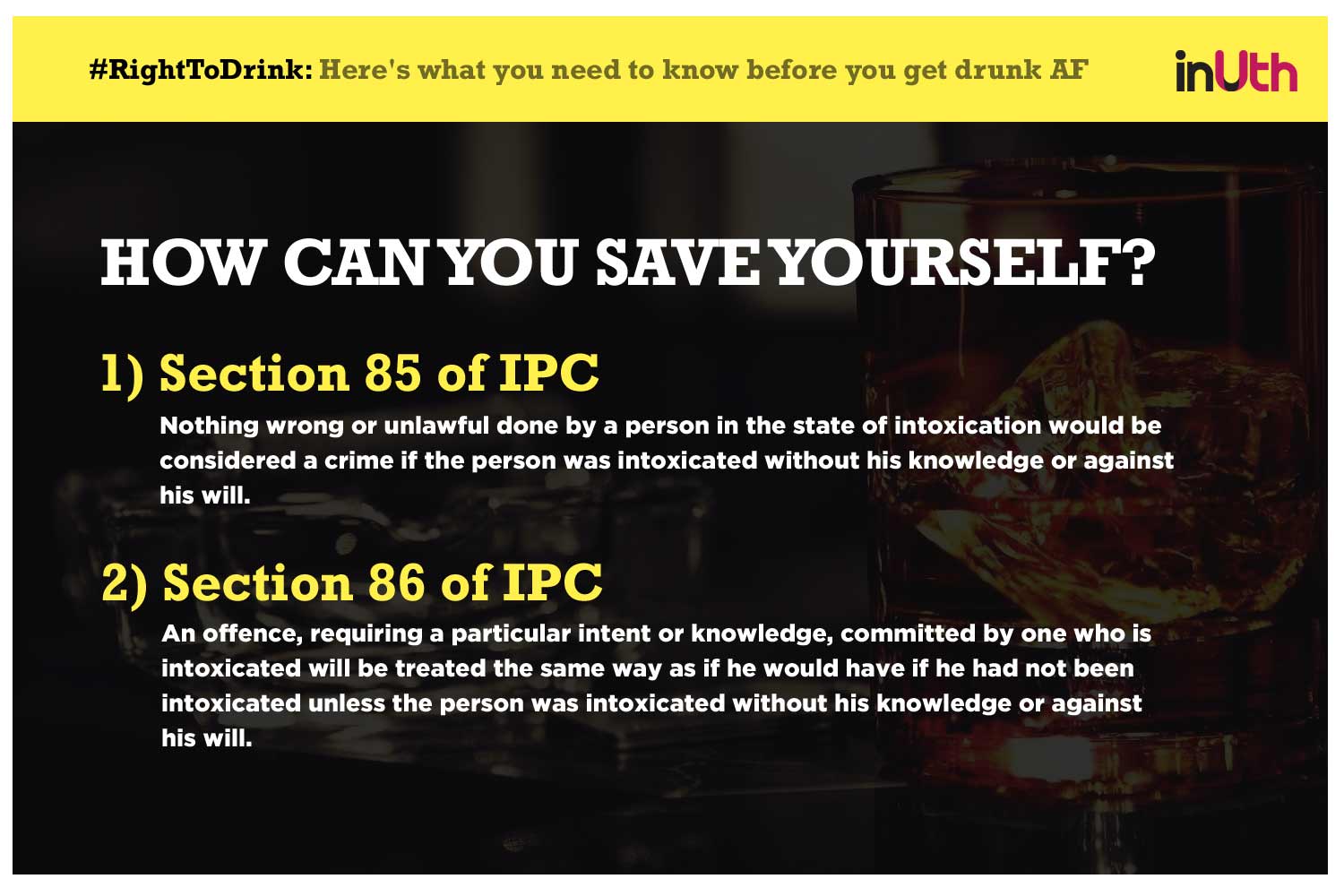 Right to Drink – How can you save yourself

How can you save yourself?

Any you do under the influence of alcohol is pretty much an offence. However, Indian Penal Code (IPC) grants you concessions from the law under two conditions:

1) Section 85 of IPC
Nothing wrong or unlawful done by a person in the state of intoxication (drunkenness) would be considered a crime if the person was intoxicated without his knowledge against his will. The only thing is that you should be able to prove that your drink was spiked. 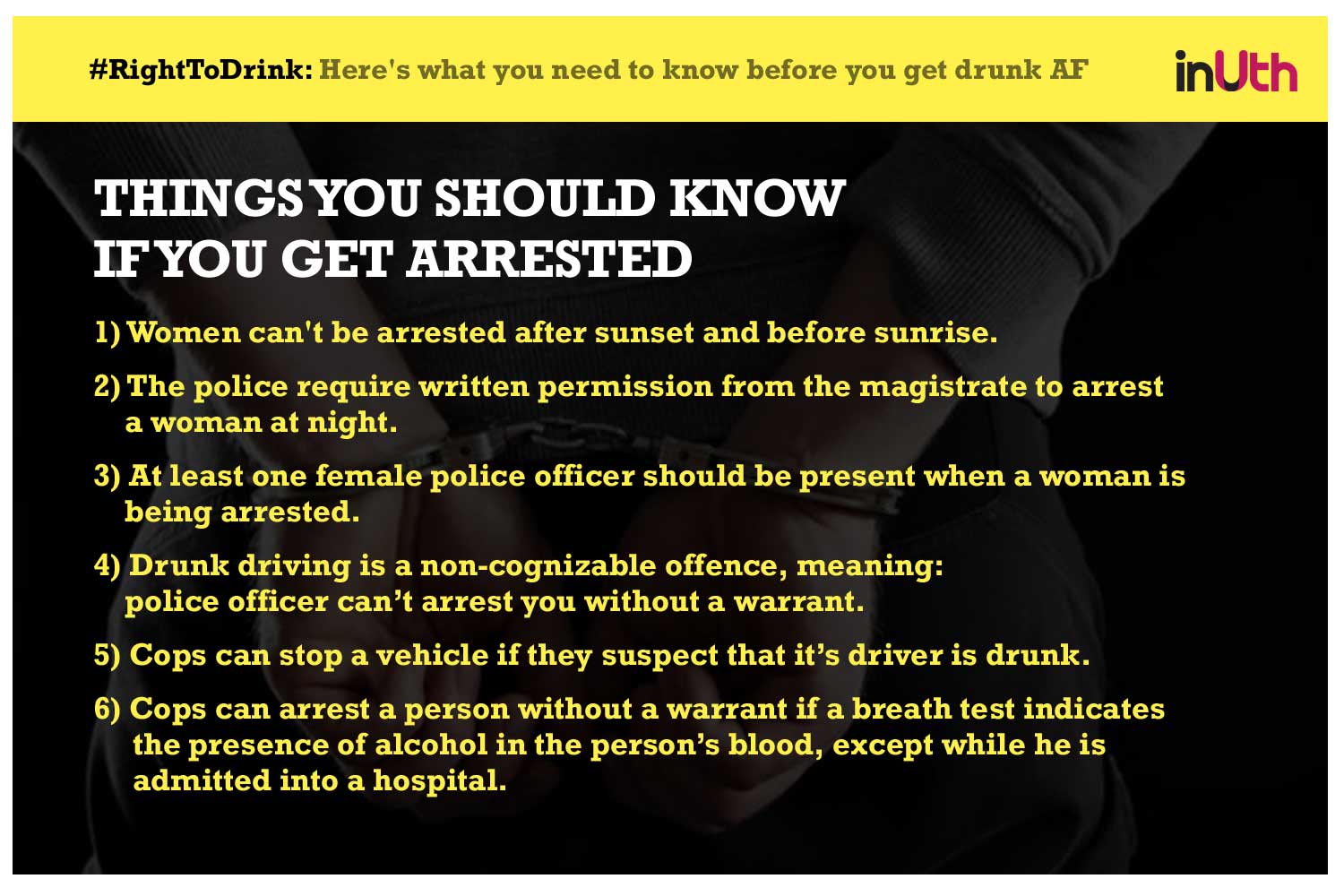 What should you know in case you get arrested?

Well, one thing that we all know is that getting arrested is not a good thing. It not only messes your dreams of a golden future but also jeopardises your present. In case you find yourself in a similar situation, here are some laws that might come handy:

1) Women can’t get arrested after sunset and before sunrise.

2) The police require written permission from the magistrate to arrest a woman at night.

3) At least one female police officer should be present when a woman is being arrested.

4) Drunk driving is a non-cognizable offence, meaning the police officer cannot arrest you without a warrant.

5) Cops can stop a vehicle if they suspect that its driver is drunk.

6) Cops can arrest a person without a warrant if a breath test indicates the presence of alcohol in the person’s blood, except while he is admitted to a hospital.

7) Cops can arrest a person without a warrant if a person refuses to go for a breath test, except while he is admitted to a hospital.