In the 16th Century, the Mughals emerged as the mightiest force in India and rarely tasted defeat. In 1540, the mighty Sher Shah Suri defeated Mughal emperor Humayun at the Battle of Kannauj in 1540 and forced him out of India. However, after Shah’s death, Humayun regained control of Delhi in 1555. Soon after Humayun’s death in 1556, the Mughals were once again defeated, this time by Hemu Vikramaditya, who later came to be known as the last Hindu emperor to rule India. Notedly, Hemu was the first Hindu king to control the city since the establishment of the Delhi Sultanate at the beginning of the 13th century.

There are conflicting accounts of early years of Hemu, however, there is a general consensus among historians that he was born into a Hindu family which had limited means. He spent his childhood in Rewari, a small town south-west of Delhi, and began working as a tradesman very early in life to support his family.

In 1545, when Islam Shah ascended the throne of Suri empire following the demise of his legendary father Sher Shah Suri, he appointed Hemu as superintendent of the market in Delhi. Soon, Shah discovered soldierly qualities in Hemu and appointed him as chief of intelligence. Shah liked to recruit Hindus alongside Afghani generals so that they could keep a check on each other. He was also assigned the task to keep an eye on the movements of Humayun’s half-brother, Kamran Mirza.

However, soon after Shah’s death, his 12-year-old son Firoz Khan ascended the throne but was killed within three days of his accession by his uncle, Adil Shah Suri. Under Aadil Shah, Hemu waged wars and won as many as 22 battles against Afghan rebellions and proved himself to be a brilliant military commander. At the Battle of Chhapparghatta in December 1555, Adil Shah and Hemu routed the Bengal forces and their ruler Muhammad Shah was killed. 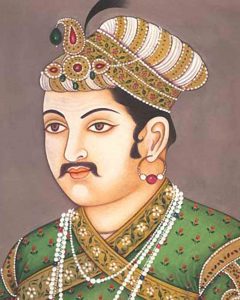 From military commander to king of Delhi

After Bengal, he waged a ruthless war against Mughals, driving them out from Bayana, Etawah, Sambhal, Kalpi, and Narnaul. In Agra, the governor fled without putting up a fight. However, Hemu’s biggest victory came in Tughlaqabad, where his forces defeated Mughal army under general Tardi Beg Khan after a bloody battle. After a trail of successful campaigns against both Afghan rebels and the Mughals, Hemu captured the Delhi throne on October 7, 1556, and declared himself an independent king, assuming the title of Vikramaditya.

The Second battle of Panipat:

Hemu’s reign was shortlived as Akbar’s 10,000 strong cavalry force marched towards Delhi and confronted his army on November 5, 1556, at Panipat, what came to be known as the second Battle of Panipat. Notedly, the first battle was fought 30 years earlier where Akbar’s grandfather Babar had defeated Lodis.

Mughal forces were led by Ali Quli Khan Shaibani. Since Akbar was very young, he and Bairam Khan stayed eight miles away from the battleground. On the other side, Hemu was leading the army himself, riding an elephant. It was an intense battle where Hemu’s forces inflicted huge damage to the Mughal army. However, when Hemu was very close to victory, a freak arrow came flying from Mughal’s side and struck his eyes, knocking him off his elephant. The sight of wounded king triggered a huge panic among his soldiers who began to break formation and started running away. Soon, Hemu was captured along with elephant. The battle saw heavy casualty with nearly 5,000 soldiers lying dead on the battlefield and many others got massacred while fleeing. When Akbar’s general Bairam Khan asked the 13-year-old Emperor to behead Hemu, he blatantly refused. Finally, Bairam Khan beheaded Hemu with his sword and sent his head to Kabul.

Hemu’s death paved the way for re-establishment of the Mughal rule in Delhi, which lasted for another 300 years before it was ended by the British. This is how the last Hindu king’s epic journey ended.