Being a Bengali, I have grown up in a culture where the whole year is hinged around Durga Puja. I have grown up reading books, magazines, and newspapers in which Durga and her four children – Lakshmi, Saraswati, Ganesh and Kartik were a part of the popular narrative. Maa Durga has always been at the centre of our lives as Bengalis.

The Goddess is like an aunt who comes to visit every year for five days with her four kids. Bengalis believe the weather changes according to what mode of transport she chooses. For example, this year she is arriving in a boat. That’s why it is raining so much. Each time it rains, I hear my mother say, “Maa Durga jaahaje aaschen”. Mother Durga is coming in a ship.

Every year popular Bangla magazine Anandamela releases a cover image based on her mode of transport. So when I heard a few people claim that their sentiments got hurt when popular hair stylist Jawed Habib took out an ad that showed Durga and her children visit Habib’s saloon, I was a bit amused. 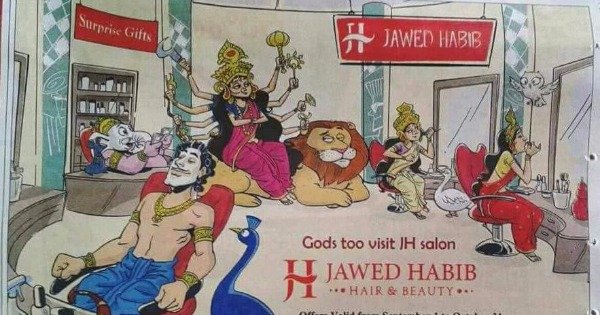 There can be two reasons behind this utmost stupidity:

Jawed Habib did go ahead and apologise for ‘hurting’ religious sentiments. I was indeed angry at him for bending down to political blackmailing but then I understood why he did it. At the end of the day, he has to run a business irrespective of which political party is in power. And as for us, the people, we are happy to be played around in the name of religion, caste or creed.

P.S: We all know that India was divided on religious grounds in 1947. Of course, most of the land that was partitioned belonged to Bengal and Punjab. However much before, in 1905, the British tried the same communal agenda by dividing Hindu Bengal from Muslim Bengali. At that point, Bengali people stood up as one. Rabindranath Tagore, the man who wrote Jana Gana Mana, the same song we stand up in respect before a movie begins in the theatre, started a movement to unify the Bengali people. He started tying rakhi over the wrists of Bengali Muslims. There were widespread protests over this British agenda to divide a group of people who always saw themselves as Bengali first. Eventually, by 1911, Bengal was reunified on the lines of Akhand Bangla, where being a Bengali was more important than being a Hindu or a Muslim or a Christian. Anyway, that’s a story that hardly means anything to us in 2017.