Centre has proposed to amend the Income Tax rules that make it mandatory for a person applying for PAN card to write his father’s name. In case of single parents, the amendment would also allow having only the mother’s name on the PAN card.

“It is proposed to amend the Income Tax rules so as to provide that furnishing of father’s name shall not be mandatory for a person whose mother is the single parent,” an official statement said.

At present, providing father’s name in the PAN application Forms (Form No 49 A and Form No 49 AA) is mandatory. 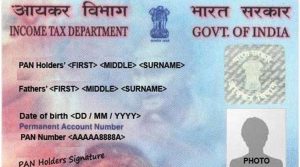 The changes have been proposed after tax department received several representations seeking relaxation in the rules regarding father’s name in the PAN application. Those with mothers as the sole parent, have faced difficulty in applying for PAN.

Though it’s a long road but we are gradually moving towards a gender-neutral society.

In March, the Bombay High Court had allowed a 22-year-old unwed mother to remove her daughter’s biological father’s name from the birth certificate, Indian Express reported. While in 2015, the Supreme Court had allowed an unmarried mother to apply for guardianship of her child without sending a mandatory notice to the father who did not have any ties with the child after its birth.