It has finally dawned upon the Indian Railways that its dynamic pricing of train tickets is actually driving passengers away. This is not very surprising given the flexi-fare system would, at times, end up being costlier than airfare.

The national transporter has now decided to do away with the dynamic pricing in 40 trains which is about one-third of the total premium trains covered under the scheme. That’s not all, for the remaining 102 trains under the scheme, the railways will soon offer up to 50% discount for ‘last-minute’ bookings made for seats available up to four days before the journey. There is another graded discount scheme put in place for trains that see less than 60% bookings. The flexi-fare scheme was introduced for 44 Rajdhanis, 46 Shatabdis and 52 Duronto expresses — in September 2016, Economic Times reported. 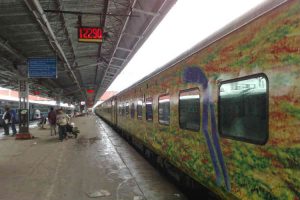 The passengers have often complained about poor food quality on trains. (Photo: Wikipedia)

The scheme caused a furore when it was first implemented giving the railways, which is a vital source of commute, a bad name and an immediate drop in passenger travel. It was also criticised in a Comptroller and Auditor General (CAG) report that suggested the transporter to rationalise the scheme and continue it only on routes where the need arises.