The love story of Prithviraj Chauhan and Sangyogita has long been a popular tragic romance that has become as much part of the Indian folklore as the legends of Heer-Ranjha or Sohni-Maliwal. The 12th-century king’s love story was immortalised by his court poet Chand Bardai in his epic poem Prithviraj Raso. It has been told and retold multiple times, with each narration keeping up with the changing times. The romance was highlighted in the comic book series Amar Chitra Katha as well as in the historical TV drama Dharti Ka Veer Yodha Prithviraj Chauhan. 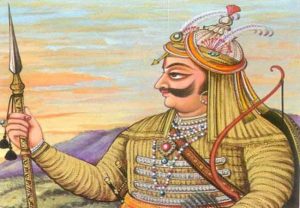 Prithviraj was born in Gujarat and was a ruler of Ajmer. However, it’s a subject of debate whether he annexed Delhi or inherited the rule from his maternal grandfather. Legend has it that Prithviraj’s rule extended to parts of present-day Rajasthan, Haryana, Delhi and some parts of Madhya Pradesh and Uttar Pradesh. He is also said to be the last Rajput king to have ruled Delhi before Islamic invasions. Hailed as a brilliant commander, Chauhan defeated several neighbouring Hindu kingdoms, most notably Chandela. He also fought the earlier invasions of Mohammad Ghori of Ghurid dynasty. In fact, he defeated Ghori in the first Battle of Tarain (near modern Bhatinda in Punjab). 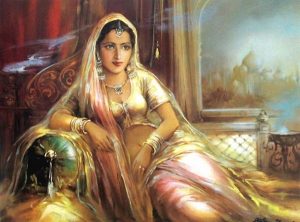 The love story
According to Prithviraj Raso, Prithviraj gained a reputation for his valour and chivalry. Soon, tales of his conquests reached the ears of Sanyogita, the daughter of Kannauj’s king Jaichand who was known for her bewitching beauty. She is said to have fallen in love with Prithviraj and desired nobody else but the king. Prithviraj too was mesmerized by the tales of Sanyogita’s beauty. It is said that they fell in love when a painter from Prithviraj’s court, Panna Ray, visited Kannauj and showed his painting of the king to the princess. The same painter painted Sanyogita’s portrait and showed it to Prithviraj.

However, before they could marry, Prithviraj and Jaichand’s relation soured due to the rivalry between their kingdoms. To assert his supremacy over other kingdoms, Jaichand decided to do a Rajsuya Yagya, however, Prithviraj refused to accept his supremacy. This ignited an enmity between the two kings. To insult Prithviraj, Jaichand planned Sanyogita’s Swayamvara and decided against inviting Prithviraj. To rub salt into the wound, Jaichand then commissioned a clay statue of Prithviraj and installed it as a dwarpal (doorman). When Prithviraj heard about the Swayamvara, he devised a plan to elope with the princess.

On the day of the ceremony, Sanyogita walked past all the kings and princes, ignoring all of them, and put the garland around the neck of Prithviraj’s statue. As it turned out, Prithviraj was hiding behind the statue. He suddenly sprang from behind the statue, took Sanyogita up in his arms and whisked her away to Delhi.

The second Battle of Tarain
Jaichand could not take the insult and forged an alliance with Ghori, the Afghan ruler who had tasted defeat at the hands of Chauhan. With the support of the Rajput king, Ghori waged a war against with a well-equipped army of 120,000 Afghani, Tajik and Turkic horsemen. A fierce battle ensued that resulted in Prithviraj’s defeat. 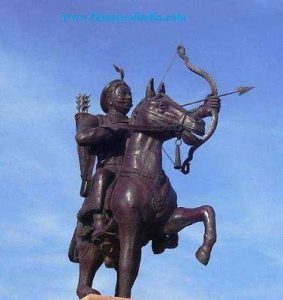 What happened to Prithiviraj after his defeat is a matter of debate. According to Chand Bardai’s account, Chauhan refused to bow his head before Ghori after defeat. The king was subsequently captured and blinded by Ghori’s soldiers. This time Bardai, the court poet, himself hatched a plan to kill Ghori. Apparently, Prithviraj was a master marksmen who could shoot arrows with his eyes closed. Bardai persuaded Ghori to organise an archery competition.

During the event, Prithviraj shot an arrow sensing Ghori’s voice that instantly killed the Afghan ruler. Shortly after, Prithviraj and Chand Bardai killed each other and it is believed that the rest of the account was written by Bardai’s son , Jalhan, who was also a witness to the war. This folklore however is not supported by historical evidence as Ghori went on to rule for 10 years after Prithviraj’s death.

Some historians are of the view that Muhammad Ghori planned to reinstate him as a Ghurid vassal. Sometime later, Prithviraj rebelled against the Afghan king, and was killed for treason. This is corroborated by numismatic evidence: some coins issued by Prithviraj from the Delhi mint feature his own name as well as the name of Muhammad on the reverse.

Despite factual errors, Prithviraj and Sanyogita’s love saga has found resonance among masses over centuries and is part of folklore in India.