Shehla Rashid Arora is an M.Phil student of Jawaharlal Nehru University (JNU) and served as the Vice-President of JNUSU for the period 2015-2016. Shehla found herself in the ye of the storm recently when she was invited by Aligarh Muslim University for an all India student leader’s meet on “the role of student leaders in building contemporary society”.

The meet was scheduled on Saturday in Aligarh. However, the very students who had invited her for a meet filed a First Information Report (FIR) against her on grounds of religious blasphemy. Shehla Rashid allegedly disrespected Prophet Muhammad in a Facebook post.

The post, dated January 9 ironically was about hate speech and questioned whether historical and religious figures should be subjected to the scrutiny of the same principles that all of us live by. In the post, Shehla had used several examples which ridiculed Hindu and Islamic religious figures to make her point. 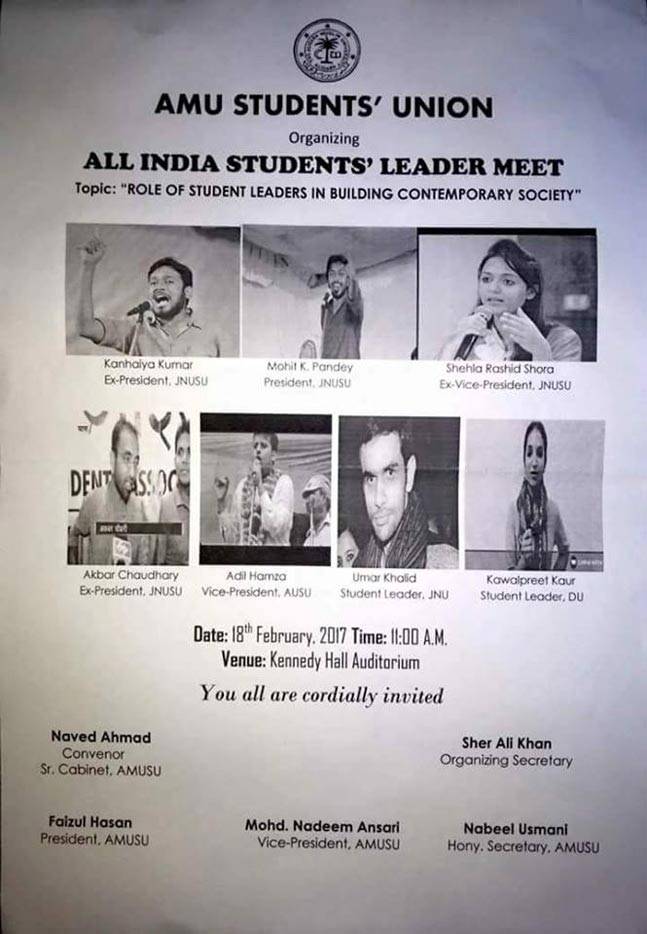 A poster for the event that was scheduled to happen in AMU on Saturday.

The post quoted some controversial phrases like “Ram was an asshole” and “Muhammad was a pedophile” to distinguish between hate speech and ‘hateful speech’. Ironically, Shehla was accused of hate speech in her Facebook post which was meant to condemn it in the first place.

The fact remains that Indians and religious groups have become way too sensitive in the past few years and what can be a bigger proof than a post which was meant to condemn blasphemy in the first place being accused of hate speech. Needless to say, the students of Aligarh Muslim University are interpreting the phrases used in the Facebook post out of context and blowing the whole issue up to epic proportions.

Anyone who has a fair knowledge to read and understand English can decipher that in the post, Rashid has used the phrases not to reinforce their meaning, but as an example to distinguish between hate speech and blasphemy.

AMUSU members didn’t pay heed to the context in which the phrases were used and filed an FIR against her at Civil Lines police station in Aligarh. Here is the Facebook post that caused a stir on social media:

Here is a copy of the FIR filed against Rashid: 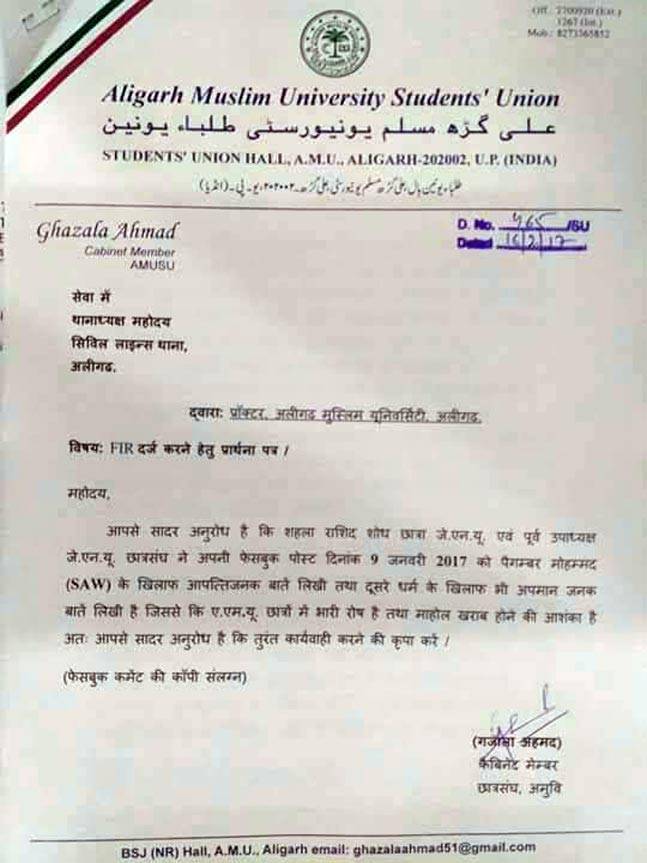 Rashid defended herself against the accusations and clarified that she didn’t mean to insult the religious figures:

“I gladly accepted the invitation and I communicated to the General Secretary of AMUSU that I would speak on Najeeb Ahmed’s issue. However, of late, the conditions that have arisen in AMU seem to point to the fact that my visit might create an unnecessary media spectacle and will divert the issue from Najeeb Ahmed’s disappearance. Therefore, I have decided to cancel my visit, in the interest of keeping the movement to Bring Back Najeeb together”.

“In the allegedly blasphemous post, I am making a distinction between hate speech and blasphemy. In fact, it is my topic of research to accurately define hate speech in India. However, some people are hell bent upon insisting that I insulted the Prophet (SAW). This is not true”.

Umar Khalid stood with Shehla Rashid in solidarity and expressed his shock at the recent events and protests at Aligarh Muslim University:

Rashid who maintained her silence on the issue has now accused AMUSU President of blasphemy in one of her Facebook posts:

Amidst the chaos, Shehla has tweeted that she’s going to speak at Ramjas College in Delhi University:

Will be speaking at Ramjas College, DU on 22nd Feb at 10:30 a.m. on ‘University and Student Politics: Can knowledge be apolitical?’