In a major goof-up, news channel Times Now  mistakenly declared Congress leader Shashi Tharoor dead. In a tweet which was a tribute to veteran Bollywood actor Shashi Kapoor who died on Monday, the channel wrote ‘Shashi Tharoor’ instead of Kapoor.

Here’s the screenshot of the tweet which was later removed: 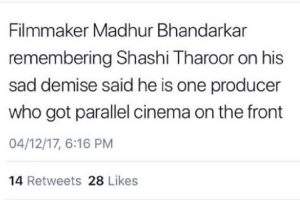 Screenshot of the Times Now tweet which was later removed

But people were quick to spot the blunder:

An intern somewhere is screaming: “DAMN AUTOCORRECT! We talk about Tharoor too maach”

Major goof up. God bless the one who made this faux pas

Even Shashi Tharoor himself took notice of it:

We’re getting condolence calls in the office! Reports of my demise are, if not exaggerated, at least premature. @TimesNow #ShashiKapoor https://t.co/nbtZGcdQTa

And so did former J&K Chief Minister Omar Abdullah:

As much as some of these channels dislike me they’ve never killed me off. You have a unique distinction here Shashi

We apologize for the typographical error on our end. @ShashiTharoor we wish you good health.

However, Tweeps were in no mood to let it go and Times Now ended up enduring a whole lot of sarcasm.

Send me a sample of whatever you were smoking in your studio.

Typographical error… All your sensational debates are yeoman errors.. Your channel itself is the biggest error society has experienced… Get well soon.. You people need medical help.. @TimesNow

Such a carelessness is laughable. I wish your channel good health after this.