The Union Environment Minister Harsh Vardhan faced a backlash on social media after he welcomed the Supreme Court order banning the sale of firecrackers during Diwali in the Delhi-NCR region. In a series of Tweets, the minister wrote,“Welcome decision by the SC on ban of firecrackers sales in NCR. Comes as a huge support for my #GreenDiwali initiative for our environment.”

“Firecrackers don’t just cause air pollution- itself a cause of numerous lung ailments, but also a noise nuisance triggering high BP, anxiety.” 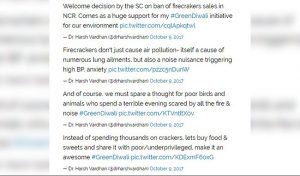 Mr Vardhan’s comments were in sharp contradiction with his own party spokesman, Tajinder Singh Bagga, who, following the SC order, announced that he would distribute firecrackers among the children living in the slums in the Hari Nagar Assembly constituency on Diwali, October 19.

“I have a plan to buy firecrackers worth Rs 50,000 and give them to the children living in the slums of Hari Nagar, so that they can celebrate Diwali,” Bagga said.

“It will not be a violation or defamation of the Supreme Court order, because the court has only banned the sale of firecrackers. It has not put a ban on buying or bursting them,” he added.

The Supreme Court on Monday restored the ban on the sale of firecrackers till November 1, saying that it wanted to assess the impact on the air quality. The apex court was responding to a petition citing unprecedented levels of pollution Delhi faced every year during the festival of lights.

Vardhan’s comments did not go down well with a section of people on social media who saw the SC ban as an attack on the Hindu festival. The minister was vociferously trolled which apparently forced him to delete his Tweets.

Look BJPwalas you will face H wrath both in elections and outside for selling out on H issues.https://t.co/BYHEIp24pO

If he stands in my constituency, I’ll vote against him. My respect & desire for Modi-ji as PM notwithstanding https://t.co/S2gTGAqNQx

I take back all the jokes I made on poor Delhites for electing Kejri. https://t.co/BsNLzaAgK6

Can you ask SC to ban poverty, disease & suffering

Hindus are losing battle by betting on horses who don’t know rules of game. https://t.co/TCd0qAf6G2

Wow! When it comes to Hindu rituals & Hindu festivals, even Brahmanandam acts like Thalaiva! https://t.co/0A67yytsnP

Largely seen as a moderate face in Bharatiya Janata Party, Vardhan entered the political scene in 1993 when Delhi voted for its first legislative assembly. He was elected from Krishna Nagar constituency in east Delhi and went on to retain that seat in the 1998, 2003 and 2008 assembly elections. In 2014 general elections, Vardhan contested the Chandni Chowk seat in Delhi where he defeated the incumbent Union Cabinet Minister of Law and Justice, Kapil Sibal of the Indian National Congress. As the Health Minister, Vardhan had taken tough steps against the humongous tobacco industry in the country by increasing taxes in the hope that consumption would reduce, which did not go down too well with industrialists and tobacco lobbyists. The 63-year-old leader was also shifted from the Health ministry within five months of his appointment.

Vardhan was a popular choice for Chief Minister among BJP cadre during Delhi Assembly elections 2015, however, he was upstaged to make way for parachute candidate Kiran Bedi.