A day after the killing of 25 CRPF jawans, who were clearing roads for development works in Sukma district of Chattisgarh, shocked the nation, Information and Broadcasting minister Venkaiah Naidu questioned the “silence” of the human right activists on the incident.

In a statement released by the I&B Department, questioning the silence of the Human Right activists, the minister asked if Human Rights are only meant for those who chose violence in furtherance of their outdated ideologies and not for the security personnel and common people?

“Why are the Human Right activists silent when such inhuman acts are mindlessly committed by outlawed elements?” the statement read.

“While the nation was shocked by this killing and violence, the so-called sympathizers and proponents of Human Rights have maintained baffling silence since yesterday. These activists raise voice and react violently if an extremist or a terrorist is killed by the Police but take shelter in silence when a large number of Jawans and innocent people get killed by those who operate underground, kill and run,” added Naidu in the statement.

Calling the death of the Jawans a sacrifice for the country, he further accused the Human Right activists of encouraging such violent activities.

“I am constrained to infer that such motivated acts of violence are being resorted to with tacit support from the so-called Human Rights advocates in desperation to derail the positive narrative emerging from the ongoing efforts by the Central and State Governments to ensure that fruits of development reach the last of the poor thereby enabling rapid economic development.”

Not just that but the minister also demanded a public outrage over these “double standards” of the activists in the released statement.

“There is an urgent need to build strong public opinion against such violent acts by outlawed elements and the so called Human Rights activists who have double standards and don’t uphold similar rights of security personnel, their families and the innocent people who fall victim to such anti-national activities,” he added. 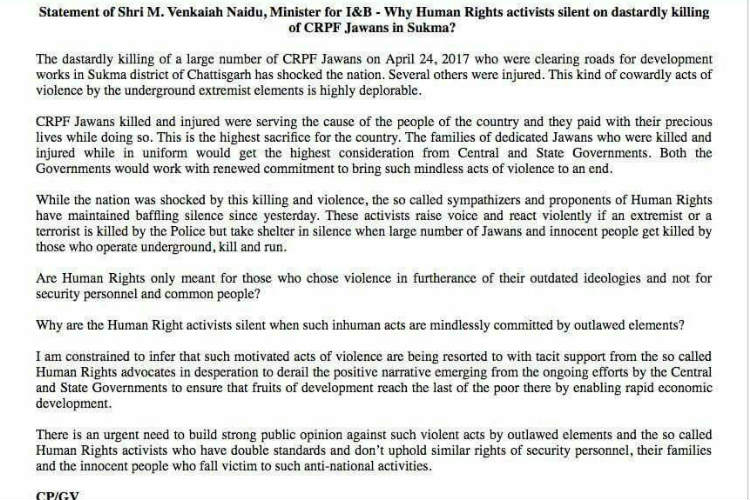 We did a FACT CHECK for the honorable minister.

India’s largest human rights and civil liberties group, the People’s Union for Civil Liberties (PUCL), today released a statement too. And in their statement, they called the killing “ruthless” and expressed its deep grief.

“The Chhattisgarh PUCL severely condemns the ruthless ambush carried out by Maoists at the Burkapal area under Police Station Chintagufa limits in district Sukma on 24th April 2017 and expresses its deep grief at the killing of 25 jawans, mostly young persons of poor families,” read a statement released by Dr Lakhan Singh, president, and Sudha Bhardwaj, general secretary, on behalf of the state chapter of the PUCL.

Prominent activist Swami Agnivesh, who has been constantly working on the issues of the conflict-torn region of Bastar, has also condemned the killing and has demanded Rs 1 crore exgratia for all the 25 Jawans who were killed. He has also asked for them to be recognised as ‘martyrs’.

“I condemn the killing of 24 CRPF jawans by #Maoists in #Sukma. I demand 1Cr ex gratia for each and recognition as Martyrs,” he tweeted.

I condemn the killing of 24 CRPF jawans by #Maoists in #Sukma. I demand 1Cr ex gratia for each and recognition as Martyrs.

Not just this but the National Human Rights Commission (NHRC) has also condemned the Sukma Naxal attack and has said that it hopes that Chhattisgarh will take note of the sacrifice made by the Central Reserve Police Force (CRPF) personnel in maintaining rule of law.

However, the PUCL also stated that de-escalation of violence requires the restoration of faith in the local Adivasi people of the State through the strict implementation of pro-tribal laws like the PESA, Forest Rights Act.

“The better provision of health, education and other welfare activities; a perception of getting justice and dignity; the restoration of civil administration as opposed to administration by the security forces in the interior areas; and addressing of popular demands as voiced by Sarv Adivasi Samaj or other local tribal organisations, in other words a political solution,” the statement read.

The area where the deadly bloodbath took place is considered the stronghold of south Bastar Divisional Committee of the Naxals headed by Maoist commander Raghu and is under the Jagargunda Area Committee led by another red ultra Papa Rao.