Untimely deaths of two Rajasthan MLAs in last six month have triggered fear among legislators who are suspecting that the Assembly building, which is built on cremation ground, may have come under the influence of evil spirits.

“I told madam that the building is constructed on a cremation ground and pujas should be performed to ward off evil spirits,” Rahman told Hindustan Times.

Government Chief Whip Kalulal Gurjar admitted that certain members of the House were uneasy ever since the deaths of the two MLAs and that he himself feared there might be a “ghost” troubling the place. 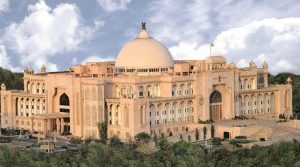 “It is said that the Assembly was built on a land which was a cremation ground earlier and there may be spirits roaming around,” he told reporters today.

Asked whether ghosts or spirits exist, Gurjar said, “I believe that souls sometimes fail to regain bodies and so, for some reason, they haunt; and so they can do such things and sometimes such things are true.”

Nathdwara MLA Kalyan Singh Chauhan passed away Wednesday while undergoing treatment at a private hospital in Udaipur. The two-time MLA was battling cancer for past three years. Kirti Kumari, the lawmaker from Mandalgarh, died due to swine flu in August last year. Both were members of the ruling party.

The bizarre demand by BJP legislators came a couple of days after former Bihar health minister Tej Pratap Yadav vacated his government Bungalow claiming that chief minister Nitish Kumar and his deputy Sushil Modi had released ghosts on him.

The elder son of Lalu Prasad is known for his hyper-religious and superstitious beliefs. Earlier, he had shut the main entrance of the bungalow to make it “Vaastu compliant”, reported NDTV.

Our leaders ought to think twice before making their superstitious beliefs public. If they are not good enough to promote rational thinking, which they are expected to, they should at least refrain from making remarks which poorly reflects on our political system and send a wrong message to masses.

Twitter was soon to express shock over the ignorance and superstitious belief of our lawmakers. Here are a few reactions.

_____ Well lets ask Home ministry and Defence Ministry to do some cleansing of souls..

So now ghost theory is traveling from Bihar to Rajasthan ! No wonder , many poll promises are buried here only ! https://t.co/u1MSFarxxB

Evil spirits? Its probably our pissed off forefathers, mad about what you people have reduced this country to!