Singer Sonu Nigam has decided to quit Twitter. Why? Because he is offended with the way Twitter India has allegedly treated his ‘comrades’ BJP MP and actor Paresh Rawal and singer Abhijeet Bhattacharya. Abhijeet’s Twitter account was suspended for his sexist and derogatory tweets against student activist Shehla Rashid, author Arundhati Roy, and other women. His tweets were so derogatory that it would be impossible to reproduce them here.

On the other hand, Paresh Rawal was apparently asked to delete his tweet against Arundhati Roy for suggesting that the author should be used as a human shield to stop stone pelting in Kashmir. To add to this, Abhijeet Bhattacharya said that she should not only be used as a human shield but also shot. Now, one fails to understand why is Sonu Nigam miffed at Twitter and the Twitterverse for condemning something that should logically be condemned? He was so hurt by this that he accused the micro-blogging site of being one-sided. “I quit Twitter Today in Defiance of this One Sided Sham. Every Logical, Sensible Patriot and Humanist should,” he tweeted.

It is difficult to understand why Nigam is calling the whole Abhijeet-Rawal fiasco a “one-sided sham”? Didn’t they really deserve to be treated and condemned for their words? This, after all is a country, where people are arrested at midnight for criticising political leaders on social media platforms. How is taking action against someone for passing crude remarks of sexual nature at women a one-sided sham? How is condemning mob violence a sham? What is he even protesting against? That Twitter was supposedly prompt at taking action against offenders on valid grounds? Another question, what exactly is Nigam’s definition of a “logical, sensible patriot, and humanist”? Any “logical, sensible patriot and humanist” would see the fault in Abhijeet and Rawal’s tweets.

Also Read: Was Paresh Rawal forced to delete his tweet on Arundhati Roy?

His tweets suffer from the classic victim-syndrome, where the victor and the perpetrator invent fluke reasons to support their actions and act as the ones being harassed and victimised.

“I am sorry I don’t belong to a place which spews so much Venom with such Relish! A place that taints me Anti-Muslim in some losers’ minds” (Sic)

What exactly were Abhijeet and Rawal doing? Weren’t they spewing the same venom with relish? And who called him anti-Muslim? A lot of people came in his support, even the so-called liberals when he questioned the need of loudspeakers in mosques and other places of worship. People lauded the fact that he stood up against a maulvi who issued a fatwa against him by shaving his head off. But clearly, Mr Nigam’s biases are reflected outrightly in his actions. His tweets can no longer be seen through a neutral prism. He has clearly chosen the side he supports. He defended a man who went about asking women about their “favourite position”, who never fails to call women “prostitutes” whenever they express their views against the government and who sees women just as a piece of meat.

Nigam tries hard to sound logical to prove that Twitter is biased but fails miserably. He argues that student activist Shehla Rashid — who was at the receiving end of vile comments from Abhijeet — had made a derogatory tweet against cricketer Gautam Gambhir. “A woman can endorse a picture of Gautam Gambhir in the front of the Army Jeep, & Paresh Rawal, criticized for doing d same to someone else,” he tweeted. 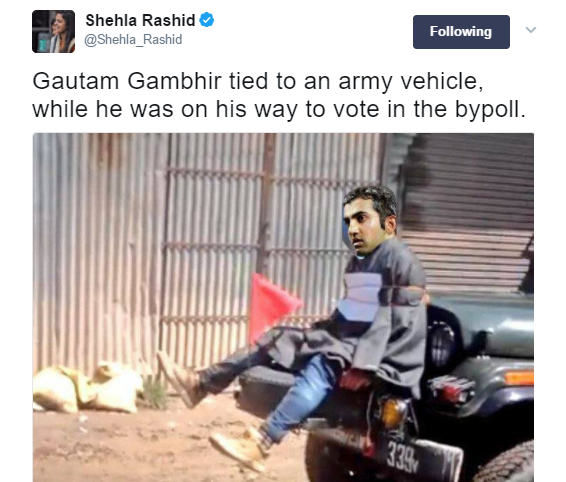 This is in reference to the April 9 incident in which a Kashmiri citizen was tied to the jeep of a security personnel as a human shield to reign in stone-pelters. While many had condemned this act, others had lauded Major Leetul Gogoi — the officer who had ordered this. Gambhir belonged to the second group of people who thought Gogoi’s heroic act deserved to be lauded, while Rashid saw it as a violation of a citizen’s right. So, to express her point of view she tweeted this image – which is not very different from what Paresh Rawal said regarding Arundhati Roy.

But where is the bias here? Just like Rawal faced criticism for his tweet, Rashid faced the choicest of abuse for this tweet. In fact, she is hurled with abuses for every opinion she puts out. Why is he crying a victim then? The kind of abuse that Rashid faces on a daily basis should have made her quit this platform long back if she was as thin-skinned like Nigam.

You have to read the comments thread to this tweet to understand the point I am trying to make:

Gautam Gambhir tied to an army vehicle, while he was on his way to vote in the bypoll. pic.twitter.com/iVTXcjfrfV

Maybe Nigam was moved by the ‘plight’ of his fraternity. But it is impossible not to attach motives to his 24-tweet long rant. He has clearly chosen his side in this battle. And what he has chosen to support is not what one can be very proud of. If he quit Twitter in support of Rawal’s suggestion of mob justice and the pathological sexism of Abhijeet, then we are happy that we will not encounter his Twitter meltdown again. Adios!