Prime Minister Narendra Modi couldn’t have been serious when he sought citizen feedback on demonetisation issue through an online process. His chosen medium  of seeking feedback was a survey uploaded on the Narendra Modi app.  With more than 80 per cent of the country not having access to smartphones, this feedback mechanism wasn’t  the brightest idea at the first place. 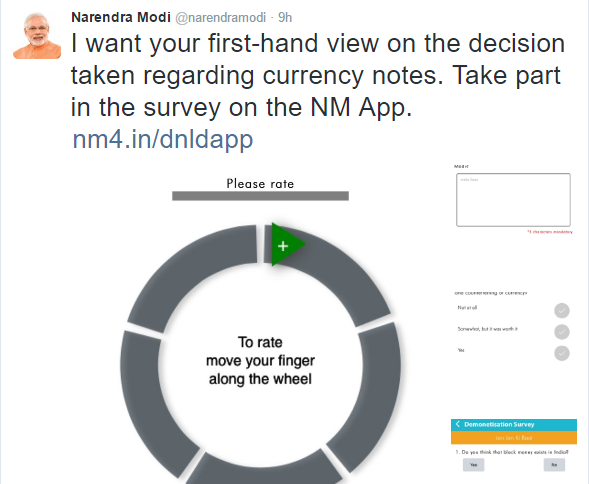 A look at the questions, however, would tell you, Modi wasn’t seeking feedback. What he was seeking was validation.

We dissect the questionnaire for you.

To begin with, some really lame questions welcome you.

The first question is: ” Do you think that black money exists in India?”

Very clever question. Who would say no to that?

Second question: “Do you think the evil of corruption and black money needs to be fought and eliminated?”

That’s a no-brainer and thus not even a question. We are sure our PM’s team could have come with a better question that didn’t insult the intelligence of those being surveyed.

The third question should have been the first question of the survey.

“Overall what do you think about the Government’s moves to tackle black money?”

Fourth and fifth question are the repetition of the same question in different words and thus redundant. 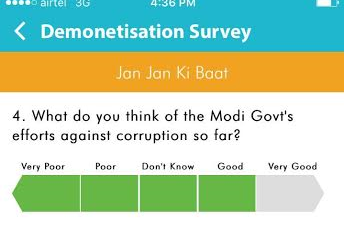 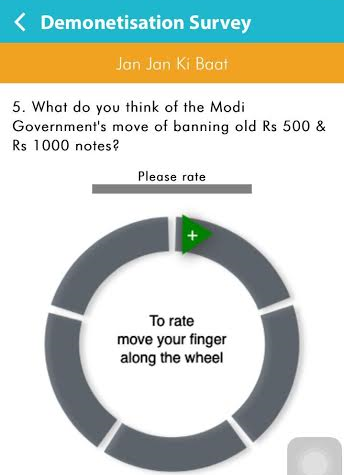 With question number 6, we are made to think a little more.

“Do you think demonetisation will help in curbing black money, corruption and terrorism.”

Now look at the option. The first option is “it will have an immediate impact”, second option is “there will be mid-term and long-term impact”, third is “minimal impact” and fourth is “don’t know”. 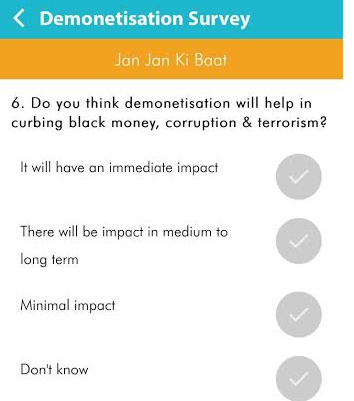 The first two are a win-win for the government. Both the options shows the success of the government.  “Don’t know” again is not a definitive reaction or a vote against he government’s move. Only if people click on “minimal impact, will it show that the government’ move wasn’t  perceived as successful. So, the window for you show your make your disapproval (if at all) for such a move is very narrow.

I feel people should have been given the option of asking their own questions to the PM. Many confused people want to know:

Can black money not be stored in the form of Rs 2000 notes which is bigger than the existing notes?

It would make sense for the PM to take these questions and give satisfactory answers for the given options leave us with practically no choice of disagreeing with the government’s decision.

Seventh question: “Demonetisaion will bring real estate, higher education and healthcare to common man’s reach?”
Really, if demonetisation makes affordable healthcare, housing and higher education accessible, then all our problems are solved. No? The logic behind this question is not well understood. As a person taking the survey, I was clueless about what to say, so I chose “don’t know”.

The trickiest of all, question number 8.
“Did you mind the inconvenience faced in our fight to curb corruption, black money, terrorism and counterfeiting of notes?”

See how the question has been worded. First of all, the question assumes that demonetisation is the right way to battle all the above mentioned problems — Corruption, Black money, terrorism and counterfeiting of notes. It also assumes that the person being surveyed are on the same with the government on this.  It’s clearly preposterous to assume something like that. Further, such a question makes all the above questions leading up to this, completely useless.

This question also treats the inconvenience faced by citizens as a secondary concern. Cracking down on corrupt elements definitely is the duty of any government. But for someone who believes in good governance, taking care of citizen’s needs should be top priority. Inconvenience caused to people for noblest of reason is a reflection of bad governance.

Question no 9: “Do you believe some anti-corruption activists are now fighting in support of black money corruption and terrorism.”

Now this is a very political question. No prizes for guessing that it’s a reference to Delhi chief minister Arvind Kejriwal and his vehement opposition to the government’s decision.  This question adds no value to the survey as it was meant to judge the government’s performance and not to examine the Opposition’s demand.

In the final section, you can make suggestions. After two weeks of mess and several reported deaths,  seeking suggestion is a little too late.  In a nutshell, this survey proves to be utterly insufficient and inefficient in summing up the larger sentiments of people standing in queues outside cashless banks and ATMs.

The survey rarely shows the government’s willingness to review its decision or to put to test its failure in foreseeing the chaos demonetisation of Rs 500 and Rs 1000 notes would cause.  On the other hand it puts those answering the questions under the scanner. This sham survey tests your commitment to the cause of fighting corruption and restricts you from giving any harsh verdict on the government’s performance in the post-demonetisation phase.  The onus of coming out clean is entirely on you, not the government.