West Bengal Chief Minister Mamata Banerjee never leaves a chance to clash with Prime Minister Narendra Modi. She has been one of the fiercest critics of Modi. But that isn’t really helping Banerjee maintain her popularity, if Google trends are anything to go by. Google trends  are often a good reflection of who is ahead in the popularity charts and who is making more impact in terms of news and views. For political leaders being searched on Google is a huge plus. Remember, much before the trends in the US elections gave a clear picture of Donald Trump’s victory over Hillary Clinton, news report about Trump trumping Hillary on Google search started doing the rounds.

In Modi’s and Mamata’s case, when we compare the two stalwart leaders on Google trends, we get some surprising results.

Now, we know Modi is a popular personality. People want to know about him. But even in West Bengal, the popularity scales are titled in favour of Narendra Modi. He beats the Bengal chief minister hands down.

If you look at this graph which tracks the interest level in Mamata Banerjee and Narendra Modi over the last one year in the state of West Bengal, you see that the former has been consistently performing better. You can also notice a more than five fold spike in interest in the Indian Prime Minister in the month of November last year. Declaration of demonetisation perhaps could have been the reason Modi was making news. He ended the 12 month cycle on another high. 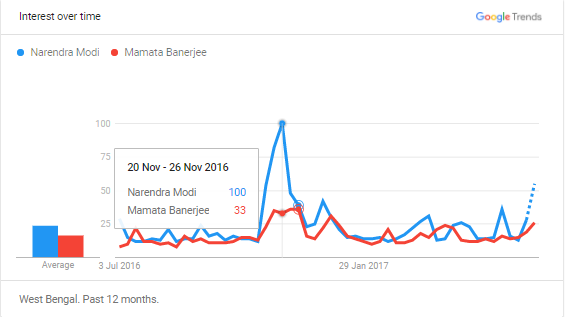 Some other patterns that we dug out from our research is the key words used to search the duo. Which means, what is the context in which the these two leaders are being searched. Maximum searches on Modi were on the words “Prime Minister Narendra Modi”. The full usage of Modi’s designation is a reflection of the intent with which an user is searching. There were no instances of searching anything about the Prime Minister with his last name. Every time his full name or his desingation was used, reflecting the inherent respect. On the contrary, in the West Bengal chief minister’s case, people used merely “Mamata” to look out for information on her. 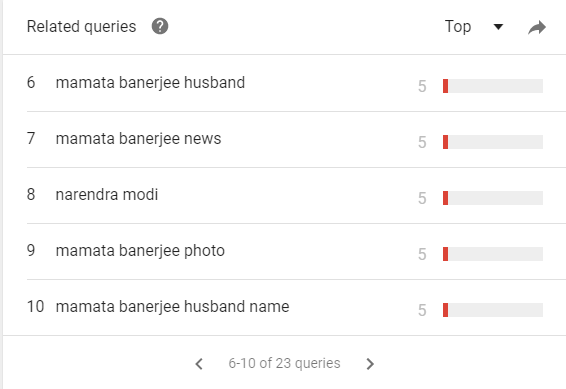 Also, people seem to be quite curious about her husband’s name as the search phrase “mamata banerjee husband name” figure quite frequently, although the she has never been married to anyone. In case of Modi, people seem fond of looking up Modi’s Mann ki Baat, his speeches, and his interview with journalist Arnab Goswami. 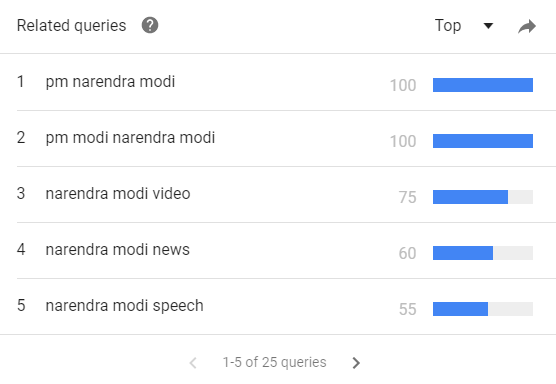 These patterns are in no way real reflection of the on ground support the leaders enjoy in the state of West Bengal. Voting patterns and election results alone can decide that. But they definitely throw in interesting insight into a user’s political interests and the kind of news related to particular political personalities they are more keen on following.