Twitterverse is busy mocking former chief minister of Bihar and wife of RJD chief Lalu Prasad Yadav, Rabri Devi. Why? Because of a statement she made at the birthday celebrations of her husband. She reportedly specified qualities she wanted in her potential daughter-in-law and future wives of her sons Tej Pratap and Tejaswi Pratap. Her sons are also ministers in the Nitish Kumar cabinet. Like all Indian mother-in-laws she has certain expectations from her would be daughter-in-law. She has a long list of demands. She wants her bahu to be sanskari, sushil, gharelu — pretty much her replica, as she specified in her own words.

This is what she reportedly told journalists on Sunday, when asked what ‘type’ of bahu she wanted for her two sons aged 27 and 28.

The whole world has now donned their feminist hats to scrutinise this statement word by word and mock the three time chief minister of Bihar.

First attempt to abuse women rights by woman itself.

This is a former CM speaking! ‘No mall-going girls for my sons: Former Bihar chief minister Rabri Devi’ https://t.co/eQtaXr5PH0

Rabri Devi doesn’t want Mall going girls for her sons because she wants daughter in laws with the same IQ as her sons.

To be honest, it is unfair to put Rabri’s statement under the same feminist lens like we do for many Bollywood celebrities or male politicians. Simply because she herself is a victim of the same patriarchal mindset that is at the root of her demand for a “gharelu” bahu. She has been at the receiving end of this mindset. She was pitchforked as the chief minister of the state overnight after her husband was named in the fodder scam. She withstood snide remarks about not being educated. She was mocked for not understanding politics and being a puppet in her husband’s hand. In a rare interview to senior journalist Tavleen Singh, she made it clear that she had no interest in politics. She revealed she had never even been to the nearby market on her own and that she was happy taking care of her kids and household affairs.

Why should a woman, who merely wants to take care of her kids bear the consequences of her husband’s doing and political ambitions?  Clearly, her husband treated her like an extension of himself and not as an individual. 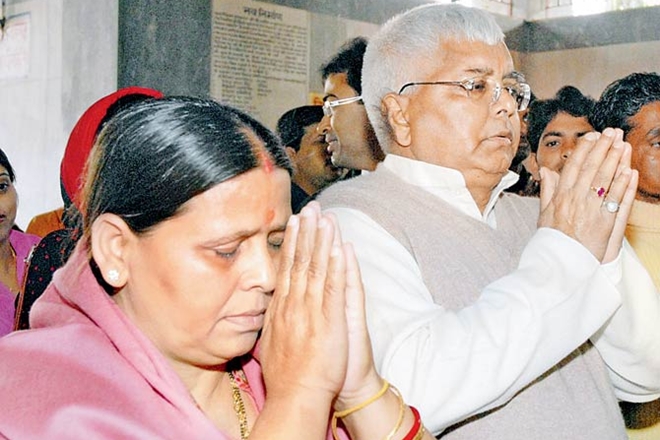 Watch this interview, where you can sense the vulnerability in Rabri Devi’s eyes when she answers questions about her educational qualification and explains how she manages to read official files despite not being well versed in state affairs. She gets quite irritated when Tavleen Singh questions her about the degree of her husband’s interference in running the government. She doesn’t come across as a very ambitious woman but she does have ambitions for her children, who are shown  quite well kept and nicely dressed in modern attire in the video. She is seen taking extra care about the education of her children- both son and daughter in the video — something even the anchor of the show also highlights.

Rabri’s “no mall going girl for my sons” is a product of her limited worldview. When Tavleen Singh asked her if she watches films, she responds: “I don’t watch films, don’t go to the cinema, just watch TV sometimes when my kids are watching “.

What’s the point of mocking a woman who has had no exposure to the outside world. She has barely studied till fifth standard and has never even been to the market on her own. Yeah, she was the first woman chief minister and all. But we know the truth of it.  What I am wondering why did a journalist feel the need to ask this utterly inconsequential and inappropriate question – what kind of a bahu she wanted for her sons? Why is it okay to ask this question? The answer is utterly regressive, no doubt but the question in itself is problematic. Why should it be a mother-in-law’s prerogative or business to list out the qualities of her son’s wife? What kind of mentality propels a journalist to ask this question — apko kaisi bahu chahiye? It’s more like asking aapko kaisi saari pasand hai – banarsi ya tasar.

The question might have ‘exposed’ Rabri Devi’s regressive views, but what purpose does it serve other than giving the woke Twitterati another chance to mock someone? Did this journalistic pursuit end up in empowering women? Will it change the way mother-in-laws look at their daughter-in-laws? When we whip and humiliate the less ‘refined’ woman and judge her actions and words through the prism of progressive modern standards, we strip a large section of women of their right to opinion – however regressive they may be, and of their dignity. We fail to empathise with them and thus fail the very cause of women empowerment.