“It ain’t what you don’t know that gets you into trouble. It’s what you
know for sure that just ain’t so.”
-Mark Twain

31 odd lives were lost on 25 August, 2017. Close to 300 left injured. The dance of violence gripped large parts of North India. From Haryana and Punjab, it took only a few hours to reach Delhi and Rajasthan. Following the conviction of self-styled Sirsa Godman Gurmeet Ram Rahim, his followers transformed parts of North-India into a war zone. Not that they had not already threatened of such consequences. They turned up in Panchkula court, in lakhs, armed with the intention of unleashing violence and a strange conviction that their Guru was not guilty.

Many have criticised Manohar Lal Khattar’s government for not showing foresight and making enough arrangements to control the violence despite early warning. In fact, Khattar is being accused of lending political support to the godman’s popularity driven by the intention of cashing in on the sway he has over people in Haryana, something which apparently helped him rake in the votes last election.

A large share of the criticism is also being borne by the obvious target – the angry mob, the supporters of Gurmeet Ram Rahim. Their behaviour has apparently put many a social media warriors to shame. “This is not the country I want to live in,” said one. Another asked, “what kind of people get brainwashed to this extent, what kind of people unleash violence to protect a criminal.” Yet, another said, “It’s a country that supports rape and rapists.” Another person concluded through a social media meme, “This is the reason India can never progress.” Some even suggested that the Army must be used to rein them in just like it is used to rein in Kashmiri stone-pelters.

The proponents of such violence fail to understand that such indiscriminate firing or use of force would neither right the wrongs in Kashmir, nor put an end to the current violence in Haryana and Punjab.

To be honest, some of these are merely visceral reactions from well-meaning people.  To an extent it is only expected of people to post angry statuses and come to freak conclusions when visuals of complete breakdown of law and order are playing on national TV.

Snapshots of what journalist Nidhi Razdan, former Jammu and Kashmir CM Omar Abdullah and Congress sympathiser Tehseen Poonawala had to say about “use of pellet guns”

Where are the pellet guns now ? https://t.co/zrlWRqLztG

I tweeted that sometime back. No pellet guns as well. Will these goons n rioters atleast be called anti nationals ? Cc @rsprasad https://t.co/42RM9yLfmW 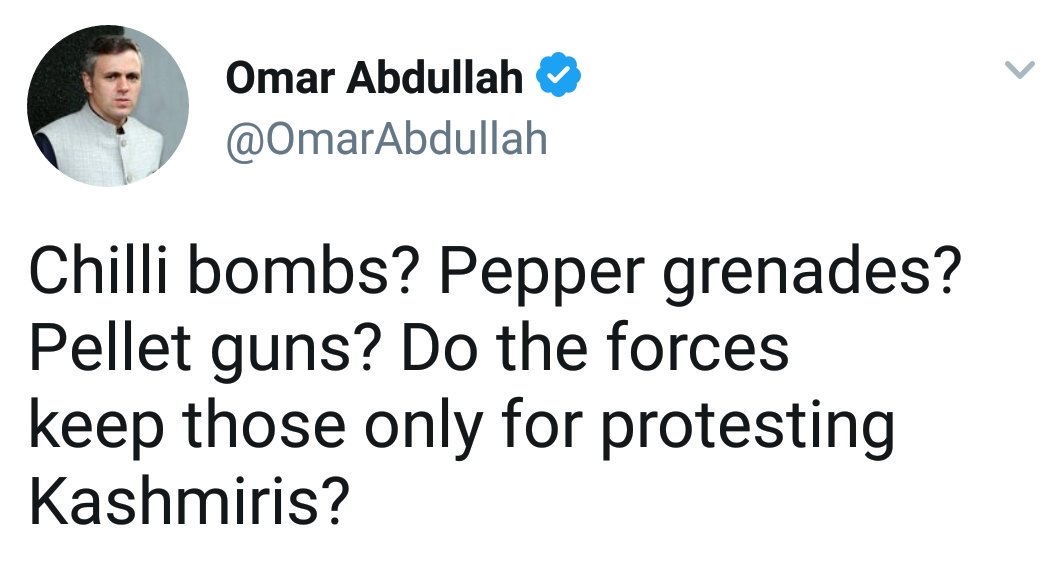 These tweets were countered by another set of social media retorts: “Real guns were used to kill people in Haryana. Do you want that to happen in Kashmir?”

Funny that a competition for tragedy is on when people continue to die on the streets.

The government should rightfully take the blame for the deaths and violence. Khattar’s head should roll. However, I am not sure about similar angry reactions against the mob and its behaviour.

Even if Khattar and the state’s administration had swooped into action with alacrity, it would only have been possible to check their unruly violent behaviour to a large extent. Yet, with or without the violence, the premis’ (as Ram Rahim’s followers are known) belief in their Guru’s divinity and innocence would have remained unshakable. Khattar’s police or even Indian Army couldn’t have changed that.

So are these people really worthy of our anger and hate? Are the supporters of Ram Rahim also supporters of rape and rapists, as pointed out by many social media posts?

“How dare you call India unsafe for women?!”, asks a country where riots in support of a rapist have paralysed the national capital region.

Don’t get surprised if you see a few lakh supporters of a rapist. There are crores of them in north India who support a mass murderer.

#Indians are killing and creating destruction in support of a rapist..amazing isnt it #IncredibleIndia

#Deraviolence In India a person who has raped more than 100 women repteadly has Chief Minister’s support. 60 million people follow a rapist

Are they really brainwashed, brainless folks?

In a way, what we saw unfold today is just not about law and order, or the culture of collusion between thug godmen and politicians in order to fool people. In fact, it’s not even about Baba Ram Rahim and his cult status.

It’s mostly about lakhs of people with full agency, people with complete control over their minds choosing to behave in a certain way, choosing to come together over a common cause. Imagine, the state of their impoverished lives that they are able to make sense of their journey as a community and individual only by surrendering to a man who is nothing more than a caricature of a comic character in a badly written Bollywood film. How disconnected they must be from this uber connected world bursting at the seams with all kinds of information to worship a fellow human being with such life threatening, self annihilating passion. And how disconnected are we to demand that they be tied to a jeep replicating Major Gogoi’s action in Kashmir?

I hope now also Police/Army will tie Baba Gurmit Ram Rahim Insan’s fan on a jeep to avoid disturbance from them..

If anything, they must be subject of our empathy, not anger.

It would be unfair to simply pass a judgement that these people who stormed the streets on Friday are supporters of rape and protecting a rapist. The fact of the matter is they really don’t believe that their beloved Guru committed a crime, to begin with. In fact, the verdict against him has only strengthened their faith that their dear Guru is innocent, that he is being framed by his enemies and is a victim of a larger conspiracy.

There is a politico-psychological concept to explain this behaviour. It’s called the backfire effect. Brendan Nyhan of University of Michigan and Jason Reifler, Assistant Professor in Georgia State University in a research titled “When Corrections Fail: The persistence of political misperceptions” define backfire effect as “individuals who receive unwelcome information may not simply resist challenges to their (existing) views. Instead, they may come to support their original opinion even more strongly”.

They established this by giving respondents newspaper reports with false facts on contentious political issues in the US, which elicited really polarised responses from voters and general public. These fake articles were aimed at reinforcing some of the respondents’ preconceived notions about certain events. In one of the reports it was written that indeed Iraq had weapons of Mass destruction and that US was justified in launching a war against Saddam Hussain.  However, when later they were presented with a corrected version of the article that no WMD was found in Iraq, their belief that the war was justified deepened further.

You can listen to this podcast to understand the issue better.

But such a behaviour is only common in cases of deeply held beliefs. People will not be so adamant in resisting new information about mundane things that are not part of their core belief system. For example, we are extremely receptive to gossips about people who hardly matter to us and immediately call someone “slut, snob or thrifty” without even knowing them properly, based on inputs from others. But we are not so lenient with facts that challenge our beliefs when it comes to intimate things like religious and political ideology.

Although at the face of it, backfire effect looks like a negative psychological response to invasion by opposing facts, to me it looks kind of life-saving. Because without such a mental firewall, we will be forced to change our worldview every day, doubt our foundations very frequently, not be very sure about our roots and core beliefs and live in a perpetual state of insecurity and disillusionment. This mechanism protects us from going insane with contradictory information pouring in all the time. But again all of these are essential parts of the pursuit of truth, self-discovery and the aim to reach a state of higher consciousness.

Sometimes stark information, life-changing events do penetrate through this mental firewall and many of us do change our positions over a period of time. Sometimes the Atheists become religious, some left-wingers endorse right-wing ideology. I have seen my father transform. From a young left-wing cadre in West Bengal in the 70s, as I know from the stories he tells me, today his political ideology and voting pattern is quite right-wing.

The backfire effect, pretty much explains why fake news thrives, why the left-wing and the right-wing fanatics are always at each other’s neck on social media platforms or are killing each other in states like Kerala, why there is violence in the name of religion, sect and godmen.

So, clearly Ram Rahim’s premis are not alone in believing in what they want to believe. They are just as guilty and susceptible to political behaviour and psychological pitfalls as the socialists, the Marxists and the Conservatives.

Ultimately, the lathi-charge and the tear gas will drive the mob away and bring them back to their unremarkable lives, in their unremarkable houses. There is no need for pellet guns, as being suggested by some. But what this multitude of angry people actually need is healing, listening and an alternative belief system that they find difficult to defy with mere facts.