A global and prestigious platform, a somber occasion and a sympathetic audience led by eminent personalities like Sam Pitroda – what else should a politician need to hit the ball out of the park and score the browniest point against his Opponent.

When Berkeley, University of California, invited Rahul Gandhi to speak on 9/11 anniversary, it seemed one of those usual moments when the Congress would whip up a buzz about Rahul Gandhi’s arriving at the political scene with a bang and a great speech. We have seen him launched and re-launched several times.

For the critics of the government, a weak opposition led by Gandhi’s Congress has been a real damper. Yet, for lack of better options, they make do with the on and off politician to amplify their concerns, politically. So, when the Congress Vice President gets a platform like UC Berkeley, there is enough excitement among the critics of the government about what he would say.

The topic at hand, “India at 70- Reflections on the Path Forward”, also gave Gandhi enough scope to articulate his thoughts about the current state of affairs in the country. 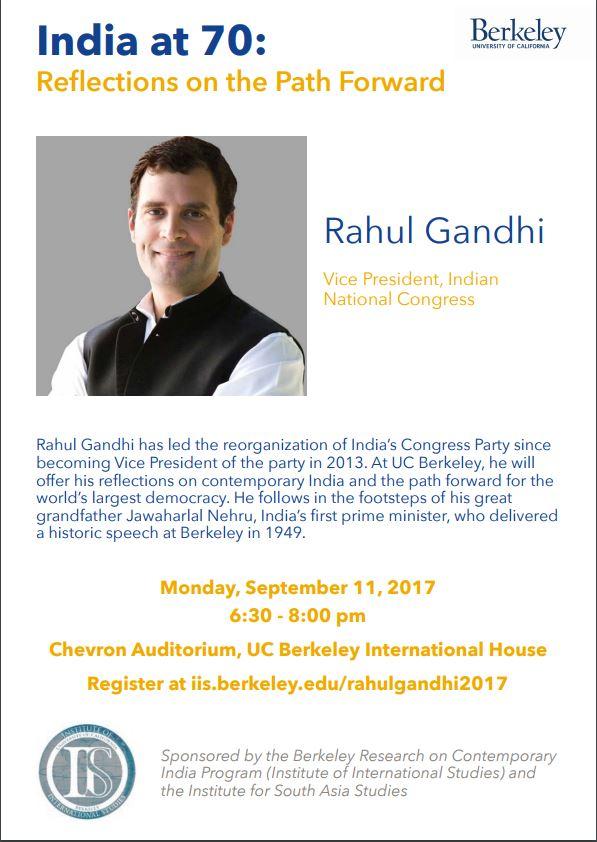 To an extent, he did strike some right chords in a well rehearsed, nicely phrased speech.

Here’s what he said on the monopoly of big businesses:

Currently, all the attention in India is paid to the top 100 companies. Everything is geared towards them. Banking systems are monopolised by them, the doors of government are always open to them and laws are shaped by them. Meanwhile, entrepreneurs running small and medium businesses struggle to get bank loans. They have no protection and no support. Yet these small and medium businesses are the bedrock of India and the world’s innovation. Big businesses can easily manage the unpredictability of India. They are protected by their deep, deep pockets and connections. But the real innovative strength of India lies with the millions of small firms and young entrepreneurs that run them. And they are relying on us to build the financial, communication and political infrastructure that would allow them to turn their skills into global businesses.

As expected, he raised the issue of Demonetisation and criticised the way “86 per cent of cash was removed from circulation overnight”

Finally, listening to India is very important. She will give you all the answers that you seek. India’s institutions have over 70 years have built a profound understanding of our country. We have experts in every single field. Ignoring India’s tremendous institutional knowledge and taking ad hoc decisions is reckless and dangerous. Decisions like Demonetisation which removed 86% of cash from circulation overnight and was carried out unilaterally without asking the Chief Economic Advisor, the Cabinet or even Parliament imposes a devastating cost in India.

He also didn’t shy away from raising the issue of “liberal journalists” being killed referring to 55-year-old Gauri Lankesh’s murder in Karnataka on September 5, that back home has shocked the liberal community and led to protests against shrinking space for dissent.

Violence and hatred distract people from the task at hand. Liberal journalists being shot, people being lynched because they are Dalits, Muslims killed on suspicion of eating beef, this is new in India and damages India very badly. The politics of hate divides and polarises India making millions of people feel that they have no future in their own country. In today’s connected world, this is extremely dangerous. It isolates people and makes them vulnerable to radical ideas.

During the question/answer session, he also praised Narendra Modi’s communication skills while asking the Prime Minister to listen to the ideas of Opposition to “engage with India”.

Just as you thought that Gandhi has finally learnt to navigate through public performances without goof-ups, reality struck. And it struck real hard. For it didn’t take a question on foreign policy or a question on Congress’ diminishing political relevance in the country to catch him off-guard. A predictable question on dynasty politics and the accusation that the Gandhi family promotes dynasty left him so defensive and defenseless that he gave away the cloak of self-composure and rationality without realising the consequences of the statement he was making at a global platform.

Here’s how the conversation went.

Audience: Claps at the question.

Rahul: (Seems a little intimidated by the clapping and appreciation for the question) Okay. Actually, most parties in India have that problem.

Rahul: Mr Akhilesh Yadav (son of Mulayam Singh Yadav) is a dynast. Mr Stalin (Son of Karunanidhi of DMK) is a dynast, Mr Dhumal’s son is a dynast. Even Abhishekh Bachchan is a dynast. So don’t run after me. That’s how the entire country is running. Last time I recall, Mr Ambani’s kids were running their business and that’s what was happening in Infosys I guess(referring to Narayan Murthy and his son Rohan Murthy). So, that’s what happens in India.

One wouldn’t need to elaborate on the banality and the pointlessness of this answer. Particularly, coming from a young politician. Abhishek Bachchan isn’t running the country, he isn’t even the top Bollywood actor. He just tried his luck in Bollywood. His Bollywood career graph doesn’t really affect the country’s political and economic graph. But when Rahul Gandhi refuses to take the responsibility for his party’s electoral performance in state after state and fails to evolve as a strong Opposition voice, it affects the country’s democratic set-up. Because without an able Opposition leader,  democracy is pretty much non-existent, at least at the decision-making level.

The other grave problem with this statement is Rahul Gandhi seems pretty comfortable with the label of a dynast and doesn’t want to change it. He is so unapologetically dynastic, that he forgets all the political dynasts he named – be it Akhilesh or DMK, got the boot from people. For India in the 21st century is coming out of its feudal mindset and welcoming independent, strong and charismatic leaders to lead them. A famous father, an important surname doesn’t lure them so much.

What Rahul must realise, that his politics aside, the rise of Narendra Modi and the love he gets from his followers is owing to the fact that he is a completely self-made person – this is something even his harshest detractors give him.

So, Rahul’s assessment that dynasties are running the country is misleading. The fact that he tried painting this picture of a young aspirational nation at a global platform is even more problematic. The act of defending yourself and your family at the cost of the image of your country shows he has still not matured as a politician. What would have been a more appropriate statement to make on part of Gandhi was to admit that the country is run on the hard work and enterprise of individuals but the fruits of their toil are enjoyed by the dynasts.

By making the statement he also contradicted his own speech made earlier, in which he said: “The real innovative strength of India lies with the millions of small firms and young entrepreneurs that run them. And they are relying on us to build the financial, communication and political infrastructure that would allow them to turn their skills into global businesses,” he had said in his speech.

What does he really believe? In the strength of the million of small firms and young entrepreneurs or the handful of dynasty businessmen? In the conviction of strong visionary leaders or those coming out of families.

While he might revel in his surname and make peace with dynasty politics, we don’t have a Leader of Opposition in the Lok Sabha. Who are the next generation leaders from his party who could take on someone like Modi, while the BJP is already ready with its new poster boy – Yogi Adityanath?

His speech today takes me back to another “momentous” speech he made when he took over as the Vice President of Congress before the 2014 General Elections, which the media termed “coronation”. He famously said, “power is poison”. As pithy and as states-manly a statement that might appear, the taste of this poison must be very sweet that it’s almost impossible for the dynasts to give it up.