Being a young journalist and a person for whom Rohith Vemula suicide mattered, I thought the solidarity march on his first death anniversary, which was to be start at Mandi House in the national capital today, is one event that must be covered. I did expect some resistance from the authority during the march but what happened there was beyond my imagination.

The rally which was supposed to start at 2:30 PM started a bit late. However, by 3:30 PM, students, activists and regular delhites were on the roads surrounded by the police and CRPF jawans, peacefully protesting and sloganeering. The usual suspect, JNU’s Umar Khalid, who spent almost a month in jail on the charges of sedition were spotted at the protest march. 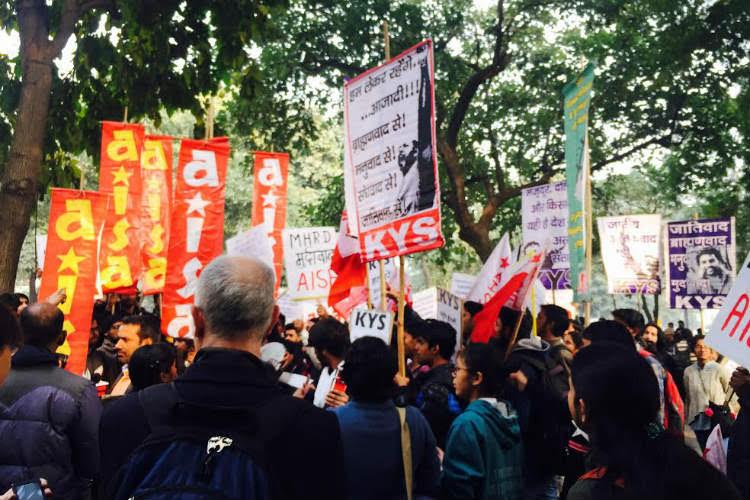 I was interviewing the JNU students when I heard people shouting. As I turned back, I was shocked to see my colleague Saptaparno Ghosh being dragged to the police van and beaten up. The cops had started detaining people all of a sudden. Why, you ask? Well I’m still about to figure out that!

I rushed to the van to tell the people that we are journalists but all in vain. The cops reprimanded us for coming out to cover the event at the first place and accused of being a part of the protests. They continued beating my colleague and pushed him inside the bus and if this was not enough, they pushed me inside the van too and only after a lot of shouting and convincing did they let me off but not my colleague. They had detained him and I had to run almost half a mile towards the Parliament Street police Station, where they took the students and activists, like a mad woman telling them that he was with me. By a stroke of luck all my shouting and howling seemed to have some effect on the security personnel and then they threw him out of the van.

Our phones, selfie stick, mic, everything was broken. It is sad that the event got no coverage in the mainstream media. Even after a year, thousands of miles away from where Vemula committed suicide a small non-violent protest unsettled those in authority. So much so that not only the protesters even  reporters were beaten up. The march was supposed to reach Jantar Mantar, a place that is designated for protests in Delhi. But the protesters could never reach there. They were disbursed and detained before that. My colleague and I returned to office almost limping. As we file this story, I am still to overcome the traumatic experience. Reports of Rohith Vemula’s mother being detained at the Hyderabad university campus just flashed on television. All this makes me doubt whether we are living in a democracy or not. From the next time I have decided to wear an armour to these events whenever I go out to cover them or perhaps shouting Bharat Mata Ki Jai will protect me from being beaten up.