Can you recognise this girl from your Facebook or Whatsapp forward messages? The girl was identified on social media as Nalini Maurya, daughter of Bharatiya Janata Party leader Keshav Prasad Maurya. As soon as the picture came out, questions were raised over how she obtained such a huge stack of Rs 2,000 notes when the permissible limit per person is just Rs 4,000.

As always, without any verification, the picture went viral. People started accusing the BJP for shielding its own party members by giving them the information beforehand. Not just the common men, political leaders also jumped into the puddle to play the blame game.

Even Congress and Aam Aadmi Party leaders forwarded the message without any verification. Congress IT Cell member Gaurav Pandhi was among those who tweeted and later deleted the message after an uproar on Twitter. Speaking to InUth, Pandhi said he got that message from someone and he just forwarded it and on realising that it is a false picture, he deleted his tweet. He also added that it was not such a big mistake that calls for an apology. 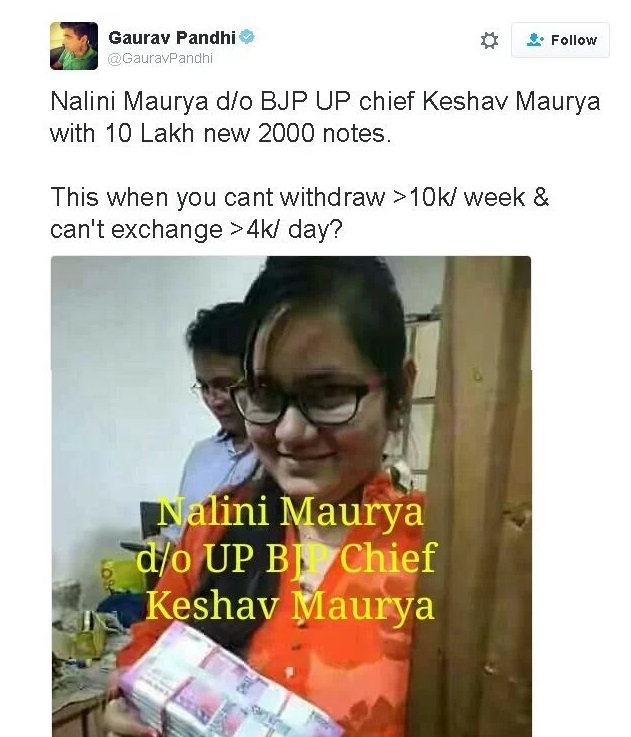 The Congress IT cell member says that it doesn’t call for an apology, but how appropriate is it for a person associated with a national party to post such a news without any clarification? He did not even ask questions over whether it’s Maurya’s daughter, he merely made the statement that she is his daughter.

He was not alone, AAP MLA from Janak Puri in Delhi Rajesh Rishi also posted her picture, obviously without bothering to verify. When contacted by InUth, he said he got information from several sources and posted the information. He also added that he should not have done so and agreed to remove his tweet and issue a clarification from his Twitter handle.

After speaking to InUth, the AAP MLA deleted his tweet.

When messages started circulating on social media, people also starting posting images of Maurya’s affidavit which clearly states that he has two sons but no daughter.

On Friday morning, Maurya also tweeted shedding light that the girl in the picture is not his daughter.

It is not known who this girl is. She may be Nalini, she may be Maurya, she may even be Nalini Maurya, but what is known is that she is not the BJP leader’s daughter. It is being said that she works in a bank and might have clicked the picture in excitement when she got the new currency in hand.

Points to be noted:
1. Keshav Maurya doesn’t have any daughter
2. The girl in the picture works in RBI
3. Logic of Congressi’s is rubbish! https://t.co/FmgPTSQHML

Unverified information going viral on social media is nothing new. Many-a-times such viral posts have landed people in deep waters too. But how fair is it for people with a considerable following to spread information from their verified Twitter handles without any verification? Did they even bother to know the source from where the information came from? Or do these people think verification of information is not even needed when levelling allegations against fellow politicians from other parties? Shouldn’t they apologise for spreading lies and misinformation?

At a time when people should be helping each other out of the currency crunch due to a limited amount of new notes, these political leaders are busy playing this game about how to vilify the government instead of playing a part in educating the common man.

Meanwhile, let’s hope no action is taken against this girl who might just have wanted to capture the excitement of getting her hands on a stack of the new notes. She would certainly not have thought even in the wildest of her dreams that a mere picture would land her in the center of this vicious circle of politics.