How did a party that won just 2 seats in its maiden General elections in 1984 become this political behemoth with a brute majority and the power to inflict its agenda with impunity? How did a party founded on the principle of Hindu nationalism become the ruling majority in a secular country? The answer to this is difficult. Because the change didn’t happen overnight. It was a process of slow evolution.  But one man, Narendra Modi, fastened this evolution and acted as a catalyst in transforming BJP from a political alternative to a sustainable political model that would last the wrath of time and political opportunism.

True, the process of mass mobilisation on the lines of Hindutva began with veteran LK Advani. The BJP website describes his Rath Yatra in the 1990s, ten years after it was founded and had a negligible political presence as “the largest mass movement in independent India”. True, it was the oratory skills of Atal Bihari Vajpayee that enthused many political fence-sitters to give BJP a try. To be honest Atal Bihari Vajpayee was the first and only right-wing statesman – something you cannot say about any other BJP leader, not even Narendra Modi. But the reality is, it was Modi’s pull that helped BJP muster a never before seen a strength of 282 seats. 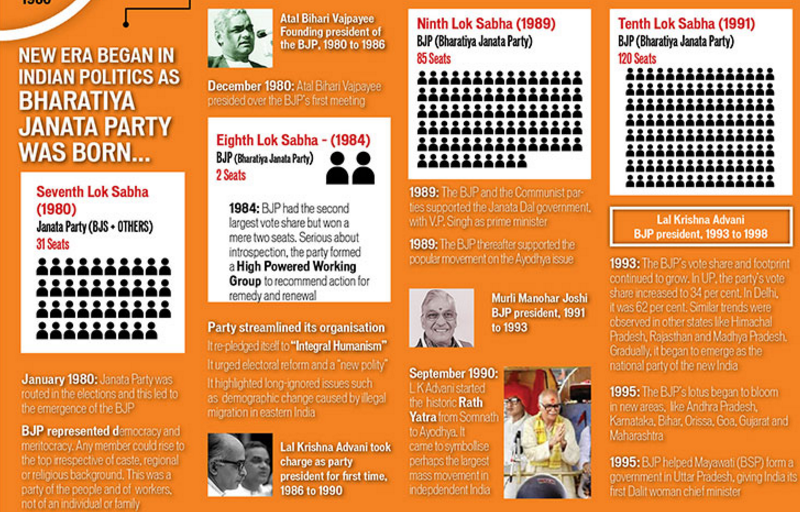 In 1999, BJP formed its first ever successful coalition. Atal Bihari somehow plodded through the five years. His charisma weaned away too fast. His failing health also cut down some golden years of politics. But as fate would have it, the man whom he taught the lesson of “Raj Dharma” would rise to become the next big leader of BJP, hyphenated by Advani’s desperate attempt at power without any plan. Where Advani failed to capitalise on his position after Atal Bihar is exactly where Narendra Modi succeeded. He built an aura and personality almost at par with myth-building around a personality. The stories of his development, the Rannotsav, the tales of Vibrant Gujarat mystified Gujarat as the land of development. The Hindu Hriday Samrat, the man who was blamed for the massacre of Muslims in the post-Godhra riots and turning a blind eye to fake encounters, soon became a visionary.

But it was after the 2014 win that we really saw the saffron surge as state after state went to BJP. Also in states where it had a minimal presence, it made some in-roads. The able calculations of Amit Shah and the star campaigning of Modi has till now proved to a winning combination. Each election was fought on Modi’s name, more so by the Opposition that was waiting for Modi to fail while treating each electoral battle as a referendum on Modi.

And all this while Modi didn’t resort to populism. He did take some tough measure – demonetisation being the most radical of decisions. Making Aadahar mandatory being another. All these decisions really aren’t very popular decisions but someone people have developed this faith for Modi, that “Woh desh ke bhale ke liye hi kaam kar rahe hai (he is working for the betterment of the country).” 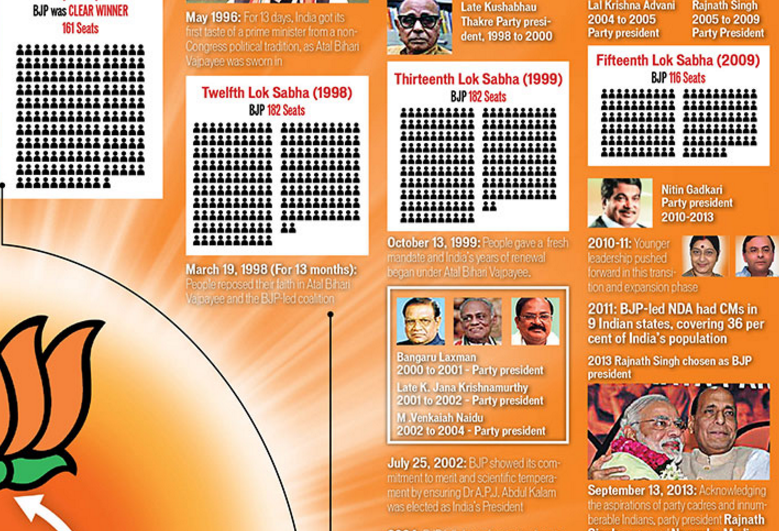 And this is exactly why Modi has been on a winning streak. He has focused on foreign policy and his publicists have been able to spread the news of his interaction with world leaders and the personal warmth shared by him with them. Somehow, Indians felt or were made to believe that India had finally arrived at the global stage. That we were now a more respected community in the world. He maintained his rockstar image by reaching out to the Indian diaspora and making a big deal about it. The pomp and show that followed all his international exhibited his popularity. By now Modi had transformed himself from a Hindu Hriday Samrat to a complete statesman. The rise of Yogi Adityanath also meant, Modi no more has to pander to the saffron whims and fancies and actually is free to implement his vision for India. The rabble-rousing can be taken care of by Yogi.

His successful appropriation of national icons like Mahatma Gandhi, Sardar Patel, and Vivekananda, popularizing Yoga and emphasisng on the education of Indian women have also helped him build a strong image who is both concerned about India’s present and in reviving its rich past.

Modi has struck the right formula to cater to his core vote bank while increasing its base with each passing election. The beef ban controversy, the emphasis on doing away with triple talaq and increasing cow vigilantism seems to be the biggest political issues today. But Modi cleverly chooses to not talk about it. GST, Aadhar, black money and teaching Pakistan a lesson is all he talks about. Only history will judge whether Modi’s policy to being selective of the issues he chooses to address and to highlight will be good for India or not. But the dual policy adopted by him has ensured that BJP is embedded in the political system just as strongly the grand old party of India, Congress was once embedded.