The answer lies in tall ambitions of Bharatiya Janata Party’s (BJP) leadership of Prime Minister Narendra Modi and president Amit Shah, under whom the BJP became the largest political outfit in the world back in May 2015. But the arrest of at least two people from Madhya Pradesh who were allegedly associated with the BJP has thrown light on poor vetting mechanism the party has in place to check credentials of its prospective members, indicative of the fact that surge in numbers has come at the cost of quality of the membership base.

It is pretty easy to become a BJP member, or volunteer for its influential Information Technology (IT) Cell for that matter. You just have to fill out an online form which asks for basic personal and contact details, and within a month your are supplied with a membership number.

A worker at BJP’s headquarters confirmed to InUth that no-follow up police check is carried out once a potential member has supplied the required information. No police clearance is required either, which means practically anyone with an internet connection, a smartphone and basic literacy skills can become a BJP member.

In order to become a member of BJP’s IT Cell, one has to fill out a similar form on BJP’s IT Cell website that is run from Nagpur. The lax quality of vetting mechanism in place is evident from the live status bar on the website that provides real-time updates of new joinings at any given time. When we checked out the website, there were people like “hhoiwesi” who had been inducted as member. That doesn’t event seem to be a real name. And such random names appeared at least three times amid some genuine ones while we were logged on to the website for nearly five minutes. 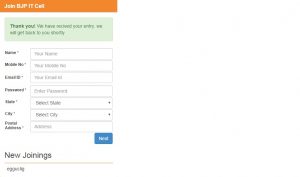 A screenshot of live updates from BJP’s IT Cell website.

One in every ten Indians is believed to be a BJP member. A large majority of them may be admirers of Narendra Modi and genuine supporters of his policies and leadership vision for the country. But the real threat to India’s internal security lies in one or two rogue elements who manage to get past the almost lax screening process.

The arrests of two individuals, Dhruv Saxena and Balram Singh, is a case to back the point.  The main suspect, Singh, allegedly used to frequently attend Bajrang Dal events in Satna in MP, the same place he was arrested by the Anti-Terrorism Squad (ATS) last week. Singh is accused of running a racket of 11 people who used to re-route international calls through the internet to make them appear as local calls.

The Indian Express quoted ATS officials as revealing that Singh also used to ask other Bajrang Dal members to open bank accounts to conduct transactions, and used to keep the ATM to those accounts with him. He reportedly used to pay a commission to every account holder every month.

According to the IE report,

“Officials said their probe has found that the two J&K-based suspects arrested — Satvinder Singh and Dadu — used to receive money from Singh.”

Saxena, on the other hand, worked in the Bhopal IT Cell of the Bharatiya Janata Yuva Morcha, a youth wing of the BJP. His mother was quoted as saying by IE that Dhruv was member of the BJP, though the state BJP unit had denied that he was an official member.

But mum Rachna Saxena stuck to her guns. She was quoted as saying,

“My son is a patriot. He will never engage in any anti-national activity…. Why is he being singled out and painted as anti-national for his reported association with the BJP?”