If you are a Kolkatan and not a teenager, there is a slim possibility that you remember a pre-Biswa Bangla city.

What’s a Biswa Bangla city, would be the logical question to ask. The answer to that would be this. 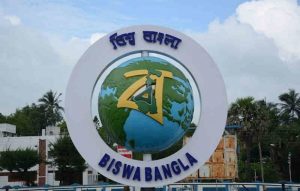 Actually, let’s not sugar-coat. By a Biswa Bangla city, we mean this. 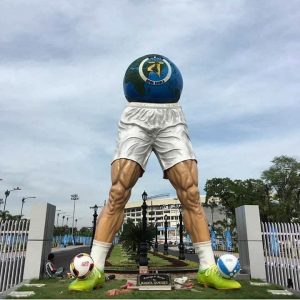 A blue globe, with the Bengali alphabet ‘Ba’ ensconced in its heart, designed by Mamata Banerjee as the state logo, is slowing taking over the city.

And we can’t do anything about it.

From Parama island connector in Kolkata’s arterial Eastern Metropolitan Bypass Road (which is now called Biswa Bangla Sarani) to Dakshinapan  in South Kolkata. The blue globe is omnipresent. And in many cases, almost cannibalistic. Most old timers will never forget the way the blue globe virtually gobbled up one of Kolkata’s most-recognised public sculpture, Paroma statute by sculptor Shanu Lahiri at the EM Bypass connector.

If you are thinking of the Pacman, we don’t blame you.

And now, Bengal’s politics has suddenly become all about Biswa Bangla after BJP leader Mukul Roy said at a public meeting yesterday that the logo was owned by Abhishek Banerjee, a Trinamool parliamentarian and nephew of Mamata Banerjee

“In the Trademarks Journal, published by The Trademarks Authority, government of India on 8.5.2017, the “Biswa Bangla” mark is shown as wholly owned by Shri Abhishek Banerjee, the nephew of Smt Mamata Banerjee, the chief minister of West Bengal. The application of the government of West Bengal is shown as pending/abandoned,” Roy has written in his letter addressed to home secretary Atri Bhattacharya and Rajiv Sinha, principal secretary (MSME).

Bengal’s Principal Secretary, Home, Atri Bhattacharya,  has stated that the company and the logo – belonged to the state government.

Because, seriously,after the embarrassment of the globe with legs sculpture of  Salt Lake stadium, we really don’t care that much for the Biswa Bangla logo anymore.

What a hideous sculpture for FIFA under-17 World Cup at Salt Lake Stadium Kolkata. (1 of 6 venues) pic.twitter.com/cOHFV9e3ub