Veteran actor Kamal Haasan has made it clear that any tie-up with superstar Rajinikanth would be unlikely if latter’s political colour is saffron, in an apparent reference to his inclination towards the BJP.

“Red is not my political complexion and I hope Rajini’s colour is not saffron. Alliance with Rajini is unlikely if his colour is saffron,” the 63-year-old actor said during his speech at the annual Indian conference at the prestigious Harvard University on Saturday.

Haasan, who recently had announced his foray into the electoral politics, spoke about his dream of creating a “corruption-free Tamil Nadu” and asserted that he joined “politics to challenge the status quo and mediocrity in politics, that is plaguing the state of Tamil Nadu.”

Ever since Rajinikanth announced on December 31 his entry into active politics, the two actors have been repeatedly asked if they would contest elections together. 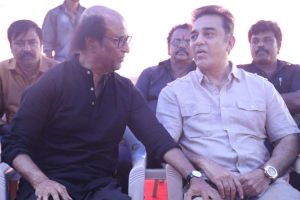 Haasan, however, mentioned that both of them are good friends, but “politics is different.” The thespian also said that the reason for starting his own party was that he does not want to work with any of the existing parties.

Haasan today launched a website maiam.com to enable people to register ideas and ignite discussions. With an aspiration to be a politician with a difference, he said, “My films were different from my peers and I want to be different in politics too.”

Rajinikanth, however, has begun party-building, although there has been no word on a formal launch of the outfit. The Kabalai star announced that he will launch a political party in time to contest in all 234 constituencies in Tamil Nadu in the next Assembly elections.