India and Pakistan came face-to-face on June 18 in an epic face-off in the final of the ICC Champions Trophy 2017 cricket tournament. As opposed to what a number of people across the globe had predicted, Pakistan put their best forward by playing exceptionally well and beat India by a whopping 180 runs.

Naturally, Indian cricket fans were left disappointed and being the overly sensitive beings that we Indians are, some of them expressed their anguish over the loss on social media. Some of them even went on to burn posters of cricketers and break their TV sets. On the other hand, Pakistani cricket fans were clearly overjoyed and did not refrain from trolling everyone who had predicted that India will take the trophy home. However, while the jokes prevailed, some of the “jokes” put forth by the renowned organisations are outright offensive. In fact, violent.

A day after the match concluded, editorial cartoonist for Express Tribune, The Friday Times, Newsweek Pakistan made a rather unpleasant cartoon to poke fun at India’s loss against Pakistan and shared it on his Twitter account while calling Pakistan Captain the “greatest” captain Pakistan has ever produced. While he thinks he is mocking India like everyone else, the picture is anything but funny.

Do we really to need to show bloodshed and brutality to celebrate a win? A number of people pointed out that the photo was in a bad taste and such violent depiction was not required to prove a point. Someone even reminded the cartoonist of Pakistan’s memorable 1992 win.

You aren’t being objective when u say that .. can you back it with figures please ..is yesterday’s win in any way bigger than 92’s win??

In bad taste. Needn’t have elements of bloodshed in order to make a point __. But ur state of mind understandable since u won after 18 yrs.

This is what happened. Not what Sabir sahab depicted. pic.twitter.com/pGoQ4T2b8X

This cartoonist is screwed in the mind , his cartoons r mostly very offensive

Besides u could hv depicted yesterday’s win with something better than squashing of kohli thru a doser.. looks bad

Against the spirit… in a very bad taste. #respectkohli

Really Grotesque. You could do better.

Moreover, both the teams who are touted as arch-rivals were extremely pleasant on the field and shared some personal moments post match that did not show animosity between the players. The players were laughing, joking and only keeping the spirit of the game alive.

Moreover, the scene was completely opposite as portrayed by the senior cartoonist. Remember former Indian skipper, MS Dhoni’s adorable photo with Sarfraz’s son Abdullah ahead of India-Pakistan match? Where is the rivalry here?

A nice pic ahead of the Champions Trophy finals. @msdhoni with Sarfraz Ahmed baby: sports beyond boundaries!! #IndVsPak pic.twitter.com/8WNAlHzf4B

Indian skipper Virat Kohli, being a true sportsperson, praised Pakistani team members for their brilliant all-round performance. Virat Kohli also said that the green brigade can upset any team on their day. Virat Kohli who wholeheartedly congratulated the Pakistani cricket team for their outstanding performance further asserted after facing a humiliating defeat that he had a smile on his face because he was proud of his boys.

While a lot has been said about Pakistan captain Sarfraz Ahmed’s English speaking skills, some Indian cricket fans came out in his defence. Have a look: 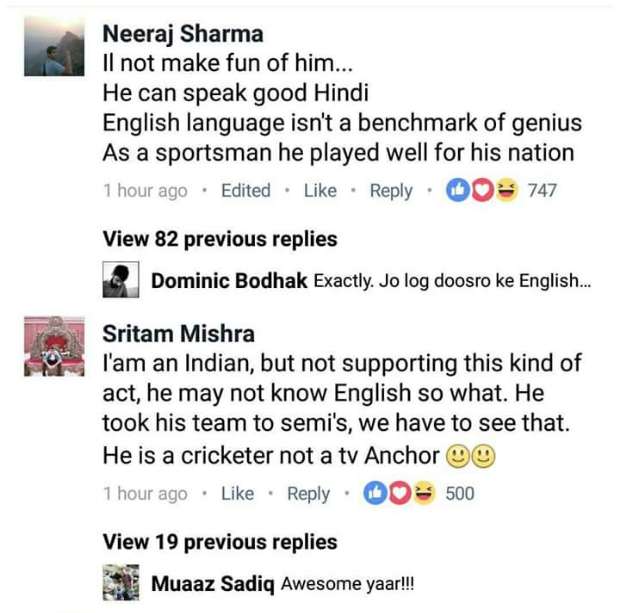 Sports never had any boundaries, Mr. Sabir Nazar. Sure, Pakistan won the game and it was a well–deserved victory. However, there’s a fine line between being funny and disrespectful. And you have managed to successfully cross that line. You have clearly taken it too far.