Fake news can spread like wildfire and that’s what happened recently. A few days ago, a picture surfaced on social media that went viral almost instantly. Mainly because of the provocative caption that accompanied it. The photo had a woman dressed as an IPS officer and a man beside her.  According to a viral post, they were killed by ISIS in Kerala. However, in a comic U-turn, the picture in question turned out to be a still from a serial.

The post targets CM Pinarayi Vijayan’s Left Democratic Front (LDF) government of Kerala for not providing “security even for an IPS officer”. But what the owner of the post, which was meant to target Keralites, forgot was that he was sharing the climax of a TV serial which is immensely popular in the state. 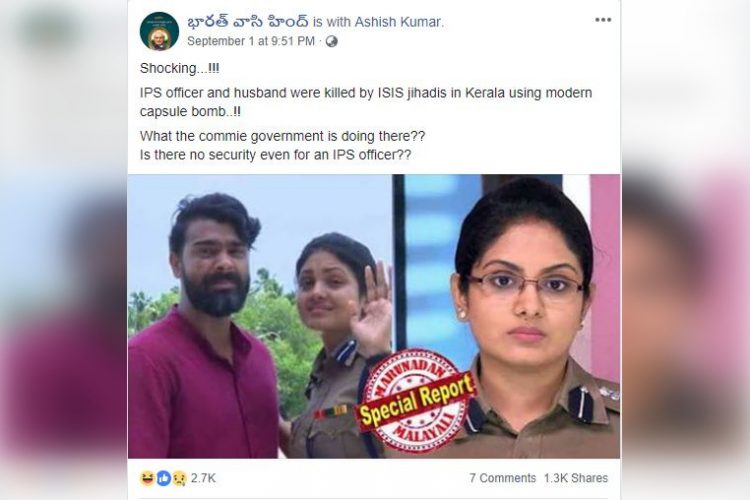 Parasparam, a remake of Star Plus’ Diya Aur Bati Hum, was one of the longest running daily soap on Asianet and had gained immense popularity in Kerala. It was about a female IPS officer and her uneducated husband fulfilling their dreams. It ended its run on August 31.

The ploy to spread misinformation failed miserably even though the post was shared over a thousand times and has over 2.7k reactions. Most of these engagements are either ‘laugh reacts’ or people sharing it to make fun of the obvious. Seemingly irritated by people making fun of the post, the owner, who goes by the name ‘Bharat Vasi’ in Malayali, commented: “Traitors only expressed happiness as comment”. 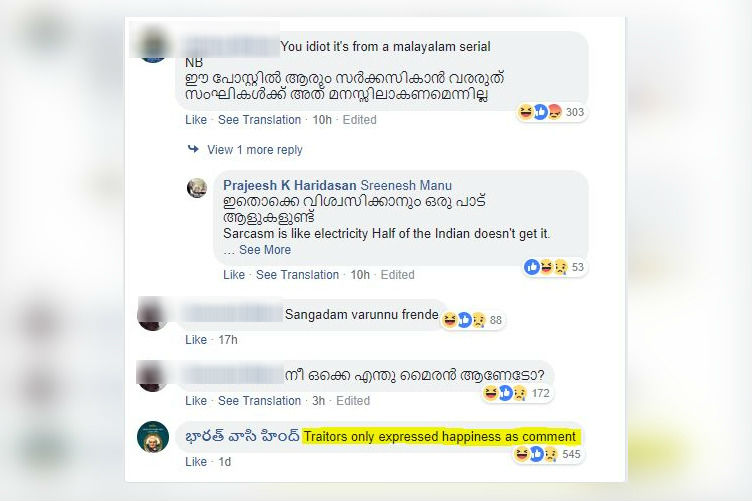 This is not the first such hate post this user has shared. Previously, he shared xenophobic and islamophobic posts, one of which even shows a woman burning the Indian flag and another suggests that cow vigilantes should pick up weapons. The worrying thing is that he has almost 5,000 friends on Facebook.