Former Supreme Court Justice Markandey Katju took to Facebook to profess his love for Tamil Nadu Chief Minister J. Jayalalithaa it is just adorable! Katju in his Facebook post called Jayalalithaa ‘a sherni’ and wished her a speedy recovery.

“When I was a young man and she too was young I thought her extremely attractive and had fallen in love with her, though of course she did not know about it, and it was unrequited love,” Katju wrote while confessing his feeling for Jayalalithaa.

The Former Supreme Court Justice also mocked her opponents calling them ‘langoors’. “Jayalalitha is a sherni, and her opponents are langoors,” Katju wrote.

“I still find her attractive (which unfortunately I am not now), and am still in love with her, and wish her speedy recovery,” he added.

In another post, Katju elaborately described his two meetings with the Tamil Nadu CM. “I have met Jayalalitha only twice, and would like to mention about those meetings. The first was when I came to take oath as the Chief Justice of the Madras High Court in November 2004,” Katju shared in another post.

“The second time I met Jayalalitha was when I was Chairman of the Press Council of India (2011 to 2014). I had gone to Chennai to attend some function, and I took the opportunity to meet Jayalaitha to request her to sanction some amount to retired judges of the Madras High Court to engage a domestic servant (as the pension was inadequate),” he wrote while describing his second meeting with Jayalalithaa.

“I told her (Jayalalitha) all about my request to the Judges of the High Court not to receive me at the airport. She appreciated this, and smiled and said ” I am happy we are having a disciplinarian as a Chief Justice,” Katju wrote describing one of his meetings with the Tamil Nadu Chief Minister. 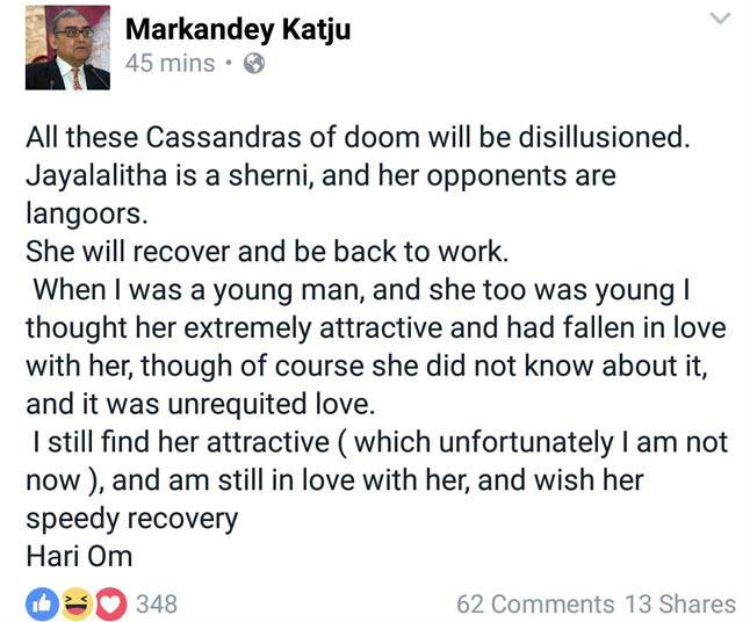 Here is his memoir of his two meetings with Jayalalithaa.

The former SC justice even shared one of his pictures with Jayalaitha.