On February 16, Prime Minister Narendra Modi gave a pep talk to students from across the country on how to handle pressure ahead of their board exams.

Unsurprisingly, the programme ‘Pariksha Par Charcha‘ was hailed a big success with claims that about 10 crore students watched PM’s speech via video conferencing.

However, the latest move by HRD ministry suggests they are a little unsure about it.

According to Times of India, schools across the country have been asked to submit photo or video proof that students watched the national telecast of the PM’s counselling.

HRD ministry has directed all state governments to make a report on PM’s interaction, the report says.

Subsequently, the state governments issued instruction to all schools, regardless of the boards, to submit details of students who watched the speech as well as submit photographs or videos of their participation.

The state education departments have issued circulars to schools asking them to submit the evidence by February 19. 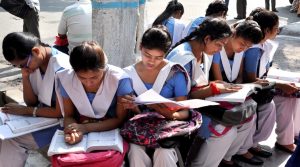 The circular also included a form which sought details of the total number of schools, enrollment figures, number of schools where students viewed or heard the telecast, number of students who viewed it through television or radio or web streaming on the websites of the PMO, MHRD, Doordarshan, MyGov.in and through internet channels.

An HRD ministry official, however, dismissed report that the ministry is seeking proof of student’s participation. “It was routine feedback where no mandatory clause was given,” he said.

During his interaction with students, the prime minister faced a question, he could have least expected.

One of the students turned tables and asked Mr Modi, if he himself was prepared for his ‘exam’ next year, the 2019 Lok Sabha elections.

Amused by student’s tricky question, the PM said, “Had he been the student’s teacher, he’d advise him to become a journalist.”