Mid-day meals in government schools all over the country have come under the scanner regarding the quality of the meals served to students. Recently, around 100 students in a government school in Mirzapur, Uttar Pradesh were seen eating roti and salt under a flagship nutrition scheme. At a government primary school in Madhya Pradesh’s Sagar district, a video of students washing plates in drain water outside the school went viral. In another instance, 26 students of a government primary school in UP’s Shahjahanpur district fell sick after consuming ‘tehri’ and milk.

We visited Diksha School, a non-profit school in Gurugram, to ascertain how they prepare their mid-day meals.

The school was co-founded in 2008 by Capt. Rajesh Sharan, a former Air Force pilot, and the school started with the mid-day meal programme in that year itself. According to Sharan,

“We had actually picked up 13 kids who were roaming around on the road, they were brought into the school. This was 10 years back. Then we noticed in a few days that an odd kid would faint and on further enquiry we found out that they had nothing to eat before they came here. Then we decided that we should provide them with something to eat and that’s how the concept of mid-day meal came up. We also thought that it would give incentive for these kids to come for the meal itself.” 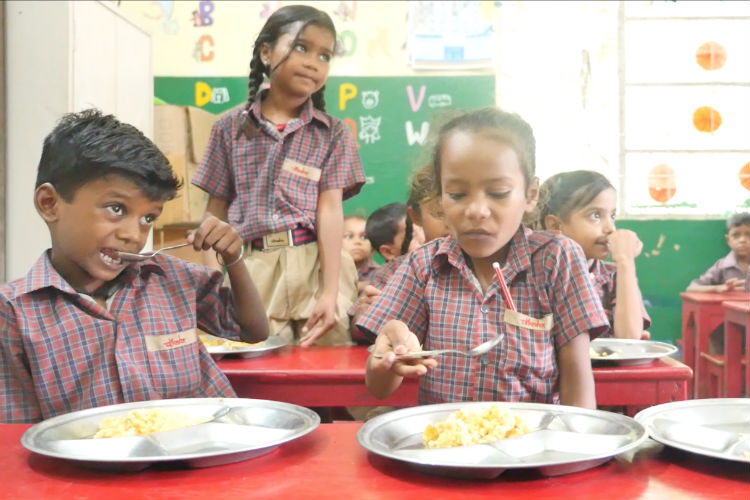 The school serves meals to all classes — ranging from pre-primary to senior secondary. The day we visited, students were being served sambhar chawal. In the morning, students are either given a banana or a few biscuits.

“They are children of migrant labourers, their mothers work as domestic help in homes around here. Their fathers are rickshaw pullers, construction labourers, carpenters etc. So we’re not very sure how much they have to eat before they come. We make sure we give them a small snack once in the morning, which is either a few biscuits or a banana. We make sure the mid-day meal provides all the nourishment they need because if they have to study, play and for their growth, it’s very important.”

Other than sambhar, children are also served soybean, kidney beans, white chickpeas and different varieties of lentils on different days of the week. The meals are prepared by a chef and her helper who prepare the meals for each day from scratch. The cook washes everything before they are to be used and fresh vegetables and grains are either donated by people or bought from the store. 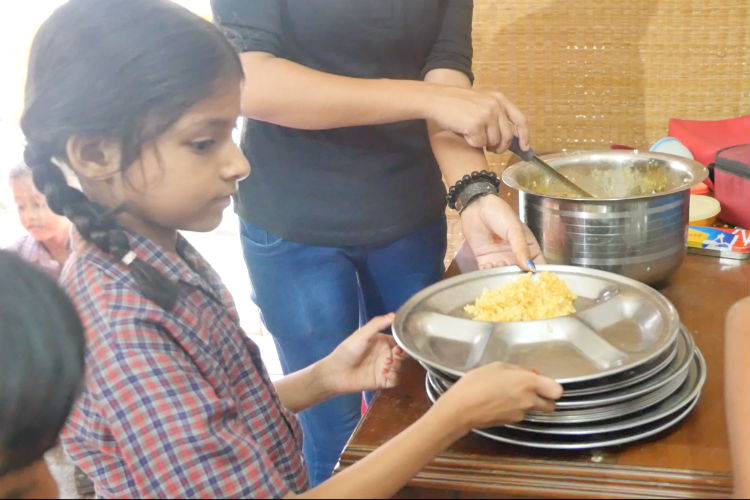 Mid-day meals are often sponsored by people who either donate to the school or buy raw products but the school does not accept food cooked from outside. Capt. Sharan says the school initially allowed food from outside to be brought, but the authorities had to put a stop to that because often the quality of the food donated was not up to the mark.

“Initially, we permitted but our experience with that was not very good because you’d get stale food as well — like leftover food from a party or lunch — so we found out that the quality of food that was coming was not good enough for the kids and then we took a policy decision not to accept any cooked food.”

In the early days, the authorities also had to convince parents regarding the quality of the food served as some were sceptical of how the food was sourced and prepared. Now, the school also conducts workshops for parents and educates them about the nutritional values of certain meals. According to the principal,

“From time to time we inform them about the importance of nutritious meal and what all the components of the meal should be in whatever best capacity they can and without having to spend too much money…And they know that vegetables are good for their children, we’ve told them that it’s important to include fruit, vegetables etc. And many times when we have our PTMs, that’s one of the things we talk about is that at least give them something to eat before they come. Quite often the mother leaves before the children have left home for school, so the children have to fend for themselves.”

The principal also asserts that doctors, who attend to students during regular health camps, are happy with how the health of kids who have been studying at the school since the beginning has started to improve. She also says that now only the kids in pre-primary classes show classic signs of deficiencies like depigmentation of skin and hair while those in senior classes are healthier.

“They said the children who stay here longer show signs of being in very good health. Their skin and their hair are much better than the new ones.”