While it’s a matter of pure speculation whether diamond merchant Nirav Modi would ever repay Rs 11,000 crore loan that he took from Punjab Nation Bank or even return to the country, the public sector bank had its share of loyal customers too.

Former Prime Minister Lal Bahadur Shashtri was one such customer; he had taken a car loan of Rs 5,000 from the same bank, and after his death, his widow had to repay the loan from her pension.

Shashtri’s family , according to Times of India, was looking to buy a car. Following enquiries by VS Venkatraman, the special assistant to the PM, the Shastris came to know that a new Fiat costs Rs 12,000. The Prime minister, however, had only Rs 7,000 in his bank account. So, he applied for a loan which was approved on the same day.

“We went to St Columba’s School on a tonga. Once in a while we used the office car but my father did not allow us to use it regularly for any kind of private work. There was a demand at home that we should buy a car,” Senior Congress politician and son of the former PM Anil Shatri told the daily. 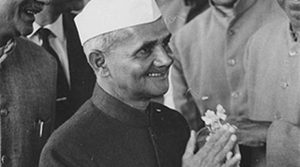 However, Shastri passed away on January 11, 1966 in Tashkent where he had gone to sign a declaration that resolved 1965 war between India and Pakistan under mysterious circumstances.

Despite having the nation’s sympathy, Shashtri’s widow Lalita Shashtri paid the loan from the pension she received after his death.

“The loan remained unpaid. It was repaid by my mother from the pension she received after my father’s death,” said Anil.

Congress MP Shashi Tharoor also shared a picture on Twitter that the former Prime Minister had taken a Rs 5,000 loan from the public sector bank to buy a Premier Padmini.

The anecdote adds that after Shastri unexpectedly died in Tashkent in 1966, the bank approached his wife Lalita Shastri to repay the loan, which she did after using her family pension.

The car in question, a cream coloured 1964 model Fiat with the impressive number, DLE 6, now stands at the Lal Bahadur Shastri Memorial in the capital, reminding people of an era of a different breed of men.