Noida civic body is launching a mega plantation drive under which it would be planting over 5 lakh saplings across the city in next one year. The initiative is expected to get a major boost on August 15 when the authorities are planning to plant 1.87 lakh trees with the help of community participation. The Noida Authority has identified as many seventeen areas including underground and multilevel parkings in the city where the plantation drive would be carried on August 15.

The drive will also be carried out at the multilevel-parking in Sector 18, Rajnigandha Underpass in Sector 16, Ajnara Roundabout and Sectors 5, 17, 18, 23, 34, 52, 72, 150 and 155, he said. The green drive will not only be restricted to the city, Noida’s district admin in Gautam Buddh Nagar plans on planting nearly 7,49,000 plants this fiscal year in an effort to improve the green cover in the state.

The green cover in Uttar Pradesh remains a dismal 9 per cent, against the national goal of 33 per cent. Akhilesh Yadav , the state’s former chief minister had set a Guinness world record for planting 50 million saplings in a day. 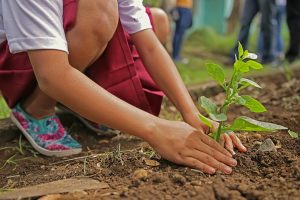 This year, the Uttar Pradesh government is looking to plant 22 crore saplings at a cost of Rs 1,000 crore, news agency IANS reported.

However, there is no reliable statistics on how many saplings actually survive after massive plantation on a single day. “The issue is not how many saplings you plant each year. Our concern should be to ensure their growth and protect them for at least three years, ” Agra Development Foundation Secretary K.C. Jain told the news agency.

Jain had written to the UP CM suggesting that the period of planting saplings should be two months and not just one day. He also rued the importance of planting sapling that is best suited to the local environment. “We must ensure that a large variety of species particularly suited to local conditions are preferred. Bio-diversity must be encouraged,” he added.