The Madras High Court has come to the rescue of school kids who are forced to carry overloaded bags to their schools and toil at night to finish assignments fearing teacher’s wrath.

Stating that children are not weightlifters, the Court has directed the Centre to instruct state governments to reduce weight of school children’s bags and do away with homework for classes 1 and 2.

In its interim order issued Tuesday, Justice N Kirubakaran said that the use of NCERT books should be made mandatory and that the state governments should be asked to ensure that weight of the satchels shall not be more than 10 per cent of the weight of the child.

“The children are neither weightlifters nor schoolbags are loaded containers. Joy, happiness, enthusiasm, trolling, rolling, kicking, running, fighting, playing with other children are natural qualities of the children. They are moulded as memory chips to store information, due to faulty pattern of educational system and to download them in the exams to prove their memory capacity which is the yardstick to assess and measure the alleged merits of children,” Justice Kirubakarn said while passing the order. 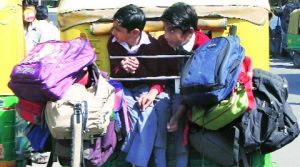 The Court also asked the centre to direct state and union Territories to formulate a “Children School Bag Policy”. in line with the policies framed by governments of Telangana and Maharashtra.

A petitioner had said that schools were assigning homework to students of Classes 1 and 2 even though it was prohibited. The Department of School Education and Literacy of Human Resource Development Ministry has said that there should be no homework till Class 2 and homework for two hours a week after that, PTI reported.

It’s a step in the right direction given the school authorities adhere to the High Court directive.

Parents often complain that the kids have to climb up stairs with heavy bags on their shoulders which makes them slouch under the weight.

Even doctors warn that carrying heavy weight could harm the soft spine of the kids.

Speaking to The Telegraph, Paediatrician Apurba Ghosh said “Children aged 8 to 15 should not carry more than 3kg weight. We have children of that age group coming to us with complaints of pain in the shoulders,”

“Vitamin D deficiency and heavy schoolbags were ‘equally responsible’ for pain in the neck region,” he added.

A Survey conducted by Associated Chambers of Commerce and Industry of India (ASSOCHAM) in 2016 found that 68 per cent of school children under the age of 13 years across India may suffer from mild back pain, which can develop into chronic pain and later into hunchback, The New Indian Express reported.

The survey noted that over 88 per cent of children in the age group of 7-13 years carry more than 45 per cent of their weight on their backs including art kit, skates, taekwondo equipment, a swim bag, cricket kit every alternate day, leading to serious spinal damage and irreversible back problems.