Delhi is engulfed in the worst smog in 17 years. While everyone is blaming crackers to be the root cause of the heightened pollution levels in the national capital, National Aeronautics and Space Administration (NASA) has released images which reveal that burning of crops in the neighboring states of Punjab and Haryana could be the biggest reason contributing to the toxic air.

Releasing the pictures, NASA noted that Punjab has even more fires brewing than it did last week. “Last week’s image showed a large amount of fires in the area, but this week’s taken by the VIIRS instrument on Suomi NPP on November 01, 2016, shows at least twice as many fires in the same area. Red outlines show the approximate locations of active burning,” NASA stated. 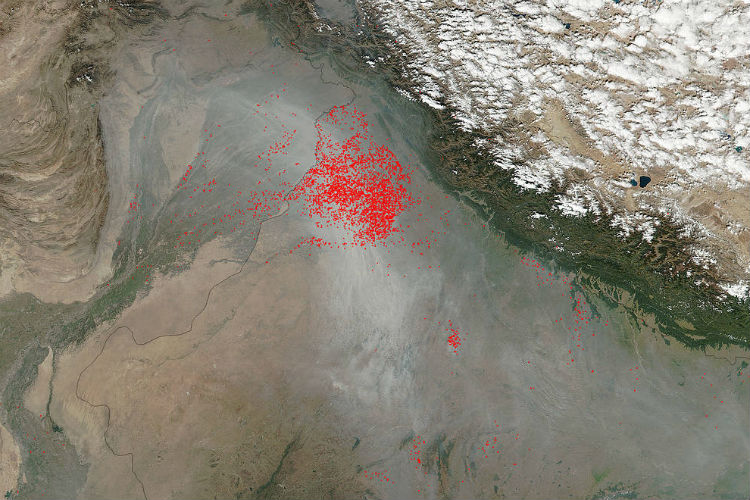 Crop burning is an age-old practice used by farmers to clear out pests that eat crops. The process also facilitates turning crop residues from the previous season into fertilising ash. The “slash and burn” agriculture practice clears the field for the farmers but the smoke that rises, makes the adjoining areas like Delhi enveloped in clouds of thick toxic smog.

Though the government has suggested alternative methods and support in order to encourage farmers to give crop burning a miss, farmers claim the options being made available are unfeasible.

But as the State and Centre battle it out, the ones facing the heat of the air pollution are the people living in the national capital. An increasing number of people have been hospitals for breathing issues, some are even resorting to taking steps like moving out of the capital till pollution levels are brought under control.

Meanwhile, civic authorities have ordered all MCD schools in Delhi to be closed on Saturday in view of pollution.