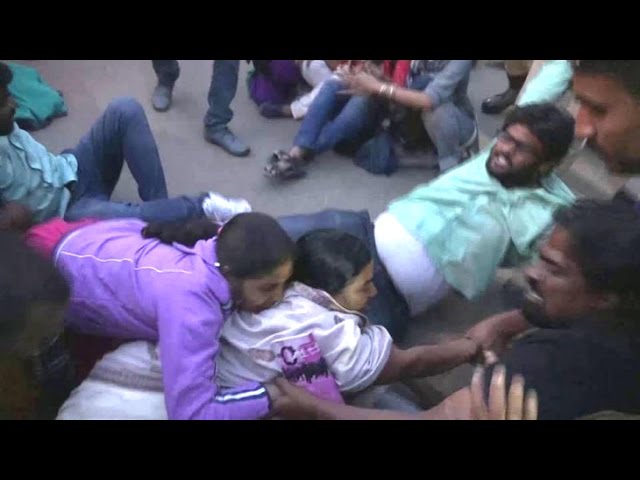 Fighting for justice for her son, who committed suicide, following rustication from University hostel.

Accused by Indian government of being a liar and faking her Dalit status to get benefits for her son. 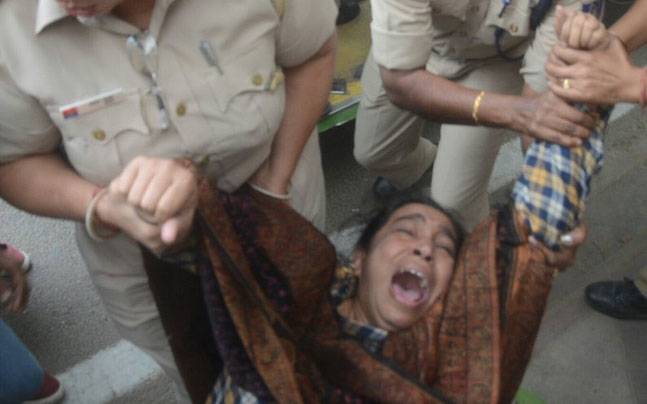 Is in search of her son who has been missing for 23 days
Dragged, manhandled and detained by Delhi Police.

Wants a CBI inquiry into her son’s disappearance.

Do you see the stark similarity in these two images and the fight that these women are fighting.

Both Fatima Nafees and Radhika Vemula are fighting for justice for their young sons. Both have been mistreated and turned away by the State when they sought answers. Yet are not giving up. Meet the new faces of dissent in Narendra Modi’s India.

Rohith, a Phd scholar, committed suicide on 17 January. After a brawl with ABPV students in the Hyderabad University changed the course of his life and made him question if his identity was the only thing that mattered. His death sparked off a nation-wide agitation with his friends and students alleging that the HRD Ministry and the University authorities were all along biased against Vemula and favoured the ABVP’s university unit president Nandanam Susheel Kumar’s version of the brawl. ABVP is inspired by RSS ideology, which is the ideological fountainhead of ruling party BJP.

A politically active student, he was an Ambetkarite and ideological clash with ABVP members was a common thing for him.

Many felt that his Dalit identity was the reason of discrimination against him. The University vice chancellor Appa Rao and Union Minister Bandaru Dattatreya were even booked under the SC/ST case. Dattatreya was the one who intervened in what was an internal matter of the University and reported the Dalit student-ABVP clash to the HRD Ministry.

However, all the agitation and promise of being fair by the Indian government came to a naught when a one-member probe committee on the matter ruled that the Rohith was not a Dalit and that his mother had lied about their identity for benefits. Interestingly, Vemula needed no reservation to enter the prestigious University. He was a bright student.

Vemula’s mother has vehemently countered all the allegations saying she was married to an OBC but she always carried her Dalit identity. Since her sons were also brought up by her not her husband, they have always lived the Dalit way of life. Vemula in one his videos on Facebook had reiterated the same thing saying he was a Dalit as he was brought up a Dalit mother.

Despite being called a liar, Radhika Vemula continues her fight.

Now comes the story of Najeeb Ahmed, a first-year MSc student at the School of Biotechnology in JNU. It’s been 23 days since he disappeared from his hostel. Strangely enough, again there is the involvement of an ABVP student. On the night of October 14, three ABVP students, Vikrant Kumar, Ankit Kumar and Sunil Pratap student allegedly came to his hostel room to seek votes from him for the upcoming elections in JNU.

Now, there are two versions of this story – First, is that the ABVP students beat him up, he was seen profusely bleeding by some eye-witnesses as reported by some media houses and attacked with communal slurs. The version questions Najeeb’s mental state. He apparently broke into a fight with one of the three ABVP students for wearing a red thread on his wrist. The warden called an emergency meeting, where he reportedly admitted to have started the fight and leave the hostel.

This is also the version being supported by ABVP. However, eye witnesses allege that the warden acted in a biased way. Some students were quoted as saying that the ABVP students brutally assaulted Najeeb in the first floor of Mahi-Mandavi hostel.

Najeeb’s mother is also not buying this argument. She has also countered that her son was mentally unsound. Najeeb’s sister said: “He got into one of the toughest courses in JNU, how can he be mentally unsound. ”

The mother-sister duo are spearheading the movement along with JNU students. However, the Delhi Police brutally cracked down on her, dragging her away from the protest site while she continued her wail.
On its part, the Delhi police defended its action saying:

Here’s a glimpse of how Najeeb’s mother was treated.

Najeeb’s mother has more reasons to be angry at Delhi Police’s action. The police authorities failing to track Najeeb’s whereabouts. She has completely lost faith in the Delhi Police and has demanded a CBI probe into the matter.